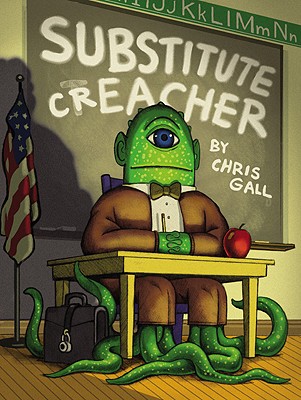 The troublemaking students of Ms. Jenkins' class arrive at school one day to discover a substitute creacher has come to put a stop to their monkey business! He regales them with mind-boggling stories about his former students who didn't follow the rules: Keith the glue-eater, Zach the daydreamer, and Hank the prankster, to name a few. But even this multi-tentacled, yellow-spotted, one-eyed monster's cautionary tales about the consequences of mischief-making can't seem to change the students' wicked ways until he reveals the spookiest and most surprising story of all: his own.

Chris Gall's vibrant artwork leaps off the page with a dynamic comic book aesthetic that will grab both parents and monster-loving kids!

* "Combines humor and a touch of magic.... certain to provide more than a few laughs."—Kirkus Reviews, starred review

* "This is a delicious little shocker of a picture book that ought to whip... crowd[s] of youngsters into a shrieking, laughing frenzy."—Booklist, starred review

"Mr. Creacher's cautionary tales, told in rhyme, are as appealing as Chris Gall's bold, cartoonlike drawings. It's an educational horror story with a happy ending."—USA Today