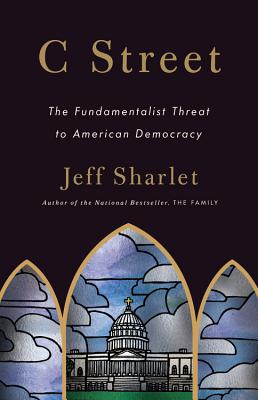 The Fundamentalist Threat to American Democracy

Jeff Sharlet is the only journalist to have reported from inside the C Street House, the Fellowship residence known simply by its Washington, DC address. The house has lately been the scene of notorious political scandal, but more crucially it is home to efforts to transform the very fabric of American democracy. And now, after laying bare its tenants' past in The Family, Sharlet reports from deep within fundamentalism in today's world, revealing that the previous efforts of religious fundamentalists in America pale in comparison with their long-term ambitions.

When Barack Obama entered the White House, headlines declared the age of culture wars over. In C Street, Sharlet shows why these conflicts endure and why they matter now - from the sensationalism of Washington sex scandals to fundamentalism's long shadow in Africa, where Ugandan culture warriors determined to eradicate homosexuality have set genocide on simmer.

We've reached a point where piety and corruption are not at odds but one and the same. Reporting with exclusive sources and explosive documents from C Street, the war on gays in Uganda, and the battle for the soul of America's armed forces - waged by a 15,000-strong movement of officers intent on "reclaiming territory for Christ in the military" - Sharlet reveals not the last gasp of old-time religion but the new front lines of fundamentalism.

Jeff Sharlet, "New York Times" bestselling author of "The Family," is a contributing editor for Harper's and Rolling Stone, the coauthor, with Peter Manseau, of Killing the Buddha, and the editor of TheRevealer.org. He has written for "Mother Jones," the "Washington Post," "The Nation," "The New Republic," and many other magazines and newspapers, and he has commented on religion and politics for NBC Nightly News, The Daily Show, the Rachel Maddow Show, Fresh Air, Morning Edition, and more. He lives in New Hampshire.

Praise For C Street: The Fundamentalist Threat to American Democracy…

"At once a gripping political thriller, a masterpiece of investigative journalism, and a timely call to arms, C Street reveals all that can be hidden within an innocuous Washington address. Jeff Sharlet delivers a warning that the blurring of the line between church and state is both an urgent local problem and a matter of global concern."
-Peter Manseau, author of Rag and Bone: A Journey Among the World's Holy Dead and Songs for the Butcher's Daughter

"Jeff Sharlet has an incredibly rare double talent: the instincts of an investigative reporter coupled with the soul of a historian."
-Hanna Rosin, author of God's Harvard: A Christian College on a Mission to Save America

"Jeff Sharlet is one of the very best writers covering the politics of religion."
-Ken Silverstein, author of Turkmeniscam: How Washington Lobbyists Fought to Flack for a Stalinist Dictatorship

"Few writers can pull off investigative journalism, historical research, and elegant storytelling. Sharlet does all this with a story that a lot of people don't want to hear and others won't believe."
-Diane Winston, author of Red-Hot and Righteous: The Urban Religion of The Salvation Army

"[Sharlet] writes with insight, verve, and, thankfully, none of the bogus punditry and bad sociology that often passes for informed discourse about the contemporary role of religion in public life. His refreshing narrative style is as engaging as his groundbreaking information."
-Frederick Clarkson, The Public Eye

"Un-American theocrats can only fool patriotic American democrats when there aren't critics like Jeff Sharlet around-careful scholars and soulful writers who understand both the majesty of faith and the evil of its abuses."
-Rick Perlstein, author of Nixonland: The Rise of a President and the Fracturing of America