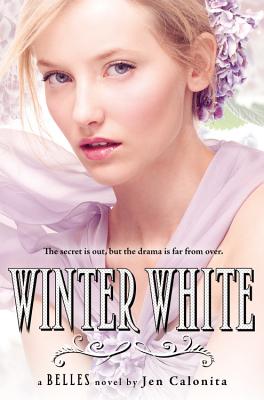 Isabelle Scott and Mirabelle Monroe are still reeling from the revelation that they share more than just the roof over their heads. The media has pounced on their story, and while Izzie and Mira have each put on a happy public face, someone is leaking their true feelings to the press. It seems as if the world is watching their every move, but at least the girls have each other.
With cotillion season right around the corner, however, Izzie and Mira have barely had time to process their newfound sisterhood. Mira has dreamed of making her debut in a gorgeous white gown forever--now if only she had an escort... Izzie, meanwhile, is still struggling to find her place in Emerald Cove, which seems ever more impossible with EC mean girls, young and old, trying to keep her down. As cotillion preparations heat up, there are dance steps to learn, manners to perfect... and secret initiations to complete?
It's time for the gowns to go on and the gloves to come off.

"This is a surefire hit for teens who like stories about friendship, romance, and mean girls getting a taste of their own medicine. The second in a series, this book can be read alone but would be best enjoyed in order."—VOYA

"Winter White is an engaging sequel to Belles (Little, Brown, 2012) but can be read as a stand-alone. Readers invested in the lives of these characters will want to continue with this saga."—SLJ

Praise for Belles:"Belles is a must-read, full of scandals, sisterhood, Southern charm, and secrets!"—Sara Shepard, #1 bestselling author of the Pretty Little Liars series

"Proving Southern belles can backstab with the best of 'em, Jen Calonita weaves a soapy tale that keeps you guessing from beginning to end."—Kate Brian, New York Times bestselling author of the Private and Privilege series

"A page-turner that has it all--tingly romance, shocking secrets, and tons of heart. You're going to love it."—Sarah Mlynowski, author of Gimme a Call and Ten Things We Did (and Probably Shouldn't Have)

Jen Calonita is the author of the VIP, Secrets of My Hollywood Life and Fairy Tale Reform School series, and a former magazine editor who has interviewed everyone from Justin Timberlake to Beyoncé. She lives in New York with her husband, Mike; sons, Dylan and Tyler; and their Chihuahua, Captain Jack Sparrow.
Loading...
or
Not Currently Available for Direct Purchase