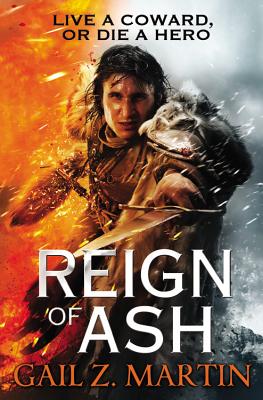 From one of the most exciting writers of fantasy adventure comes the second novel in The Ascendant Kingdoms Saga, a tale of unpredictable magic, battling warlords, and an exile's quest for vengeance.

"A book that will take over readers' thoughts until long after the final page." —RT Book Reviews

Survival is just the beginning.

Blaine McFadden endured six long years in the brutal Velant prison colony, exiled for murder. War devastated his homeland of Donderath and destroyed the magic on which the Ascendant Kingdoms relied. Now Blaine and a small group of fellow exiles have returned to a lawless wasteland, where unrestrained magic storms wreak havoc and monsters roam free.

Yet, amidst the chaos, rumors persist of a new magic that could restore the kingdoms. But the key lies with a dangerous, ancient ritual and a group of vanished survivors. Now McFadden's only hope is a small, desperate, quickly rallied army. Together they must make one last stand knowing that if they fail, the civilization of the Ascendant Kingdoms dies with them.


Praise For Reign of Ash (The Ascendant Kingdoms Saga #2)…

"Reign of Ash is a book that will take over readers' thoughts until long after the final page, as they anxiously await for the final installment."—RT Book Reviews

" The immediate action in this story pulls the reader in... And with more than a few unexpected twists, this easy-to-follow storyline will leave the reader completely surprised and ready for the next book in the saga."—RT Book Reviews on Ice Forged

"There's plenty of action and plot embroidery, and the pages turn easily."—Kirkus on Ice Forged

"Well written and full of action, this grabs the reader on the first page and refuses to let go until the very last page."—RT Book Reviews on The Sworn

"[Martin] launches herself into the adventure with whole-hearted passion."—SFX on The Summoner

Gail Z. Martin discovered her passion for SF/fantasy in elementary school. The first story she wrote -- at age five -- was about a vampire. Her favorite TV show as a preschooler was Dark Shadows. At age fourteen she decided to become a writer. She enjoys attending SF/Fantasy conventions, Renaissance fairs and living history sites. She is married and has three children, a Himalayan cat and a golden retriever.
Loading...
or
Not Currently Available for Direct Purchase