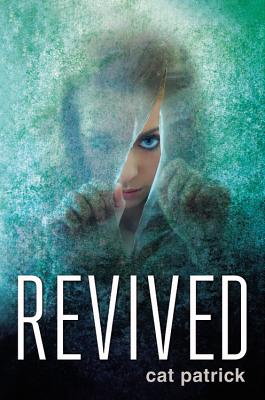 It started with a bus crash.
Daisy Appleby was a little girl when it happened, and she barely remembers the accident or being brought back to life. At that moment, though, she became one of the first subjects in a covert government program that tests a drug called Revive.
Now fifteen, Daisy has died and been Revived five times. Each death means a new name, a new city, a new identity. The only constant in Daisy's life is constant change.
Then Daisy meets Matt and Audrey McKean, charismatic siblings who quickly become her first real friends. But if she's ever to have a normal life, Daisy must escape from an experiment that's much larger--and more sinister--than she ever imagined.
From its striking first chapter to its emotionally charged ending, Cat Patrick's Revived is a riveting story about what happens when life and death collide.

* "There is not a dull moment in this novel... it is an entertaining and suspenseful book that readers interested in a little romance with their science fiction will enjoy."
—VOYA

"Forgotten is a mind-bending experience that I devoured in one sitting. Cat Patrick's exciting and impressive debut still haunts me."
—Jay Asher, New York Times bestselling author of Thirteen Reasons Why

"Cat Patrick's Revived is a thrilling story of life, death, and love -- and how friendship can change your view on all of them."—Suzanne Young, author of A Need So Beautiful

"What a page-turner! With its suspense, romance, and life-and-death drama, Revived kept me up half the night."—April Henry, New York Times Bestselling author of The Night She Disappeared

"A well-done exploration of a teen's growing understanding of death... Good entertainment with some unexpected depth."
—Kirkus

"The first person narration is effective... Offer this to sci-fi buffs who are seeking a quick read, or romance fans who don't mind science experiments mixed in with their love stories."
—The Horn Book

"Fluid and observant prose. Daisy evolves [into] a young woman with budding emotions, attachments, and a deeper understanding of what it means to live and die."
—PW

"Those interested in the emotional dynamics of a life restarted... will find this an absorbing read."
—BCCB

Cat Patrick is the author of Forgotten and Revived. She lives in the Seattle area with her husband and twin daughters. When asked about how she comes up with the concepts for her novels, Cat explained that she has a love for "high school strange."
Loading...
or
Not Currently Available for Direct Purchase