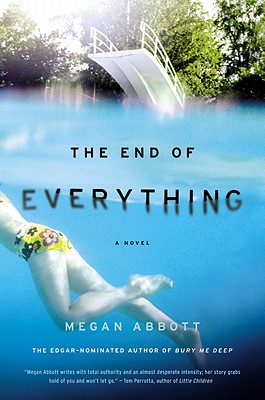 The End of Everything

“Innocence ends abruptly for 13-year-old Lizzie and Evie. As bone-deep best friends and neighbors, Lizzie thought there were no secrets between them. She sees Evie's family as perfect, especially her ideal, dazzling dad. But can we ever truly know one another? Evie disappears, and as the town frantically searches for the young girl, Lizzie becomes the focus of attention. She learns that perhaps she did not know her friend quite so well and perfection is an elusive state. Life can be confusing for 13-year-old girls, their bodies just awakening, their emotions not quite ready to be adult. Abbot perfectly captures the tragedy of vulnerability.”
— Deon Stonehouse, Sunriver Books, Sunriver, OR
View the List

From the bestselling author of Give Me Your Hand and You Will Know Me comes this darkly compelling novel about a teenage girl who disappears during a 1980s suburban summer.

Thirteen-year old Lizzie Hood and her next door neighbor Evie Verver are inseparable. They are best friends who swap bathing suits and field-hockey sticks, and share everything that's happened to them. Together they live in the shadow of Evie's glamorous older sister Dusty, who provides a window on the exotic, intoxicating possibilities of their own teenage horizons. To Lizzie, the Verver household, presided over by Evie's big-hearted father, is the world's most perfect place.

And then, one afternoon, Evie disappears. The only clue: a maroon sedan Lizzie spotted driving past the two girls earlier in the day. As a rabid, giddy panic spreads through the Midwestern suburban community, everyone looks to Lizzie for answers. Was Evie unhappy, troubled, upset? Had she mentioned being followed? Would she have gotten into the car of a stranger?

Lizzie takes up her own furtive pursuit of the truth, prowling nights through backyards, peering through windows, pushing herself to the dark center of Evie's world. Haunted by dreams of her lost friend and titillated by her own new power at the center of the disappearance, Lizzie uncovers secrets and lies that make her wonder if she knew her best friend at all.

Praise For The End of Everything: A Novel…

"A haunting story...evoke[s] the furtive blossoming of adolescent sexuality...that lies beneath the ice cream shops and sprinklered lawns of '80s suburbia."
—Entertainment Weekly

"A mesmerizing psychological thriller and a freshly imagined coming-of-age story, will draw comparisons to The Lovely Bones."—Los Angeles Times

"THE END OF EVERYTHING will haunt you as only a modern-day Lolita can."—Huffington Post

"The writing is anything but typical, as Abbott's inventive use of language to build imagery reads more like poetry than prose."
—Boston Globe

"A sensitive, unconventional tale about the infinitely complex mystery of sexual awakening that lingers in the mind long after the book is finished."
—The Guardian (UK)

"THE END OF EVERYTHING is Abbott's most refined and rapturous offering yet."
—Los Angeles Review of Books

Megan Abbott is the award-winning author of nine novels, including You Will Know Me, The Fever, Dare Me, and The End of Everything. She received her PhD in literature from New York University. Her writing has appeared in the New York Times, the Wall Street Journal, the Los Angeles Times Magazine, The Guardian, and The Believer. Currently, she is a staff writer on HBO's David Simon show, The Deuce. She lives in New York City.
Loading...
or support indie stores by buying on
(This book is on backorder)