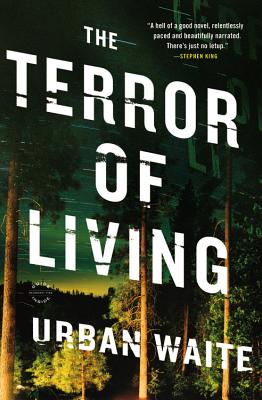 The Terror of Living

“Taut, fast paced, and gripping, this is a real page turner. Phil keeps his horse farm afloat by guiding the occasional illicit shipment across the border in the rugged North Cascades. He knows the land like the back of his hand, and with a quick ride over the mountain pass he is solvent again for a while. But this time they sent him a courier who is nothing but trouble. Bobby Drake is a lawman with a family history - his father made a few extra dollars just like Phil. Bobby is trying to live it down, doing a good job of catching the bad guys. The paths of these two cross violently on a trip gone horribly wrong in this outstanding debut.”
— deon Stonehouse, Sunriver Books, Sunriver, OR
View the List

Phil Hunt is in deep trouble.

Hunt is on the run from two men: Drake, the deputy sheriff who intends to catch him, and Grady, the vicious hitman who means to kill him.

For twenty years Hunt has lived in Washington State, raising horses with his wife on his small farm. He's tried to stay out of trouble, wanting only to make a living and taking the occasional illicit job in order to do so.

Then his last delivery goes horribly wrong, and the chase is on from the mountains down into the Puget lowlands. To have any chance of rescuing his quiet life, Hunt will have to deal with deputy sheriff Bobby Drake, a good man determined to make up for his father's tainted legacy and Grady Fisher, a very bad man intent on making a name for himself in the most violent ways. With a fondness for blood, Grady takes pleasure in the use of knives, taking Hunt's life apart piece by piece, all the while leaving a trail of victims across the state.

Relentless and gorgeously written, with original characters and a vividly powerful sense of place, The Terror of Living heralds the arrival of a writer who will be compared with the great suspense novelists.

Praise For The Terror of Living: A Novel…

"The Terror of Living opens with gentle beauty, calm before a bloody storm, before building intensity with swift, jarring, and confident storytelling power. A fine debut from a writer of obvious and substantial talents. Readers--including this one--will certainly be following Urban Waite for years to come."—Michael Koryta, author of So Cold the River

"In the tradition of No Country for Old Men, Urban Waite has written a nail-biter that takes off from the get-go and never stops, a book chock full of memorable characters and kick-ass writing. Clear your calendar before reading this one, folks, because once you start there's no stopping until the end, which arrived much too quickly for this reader. A smashing debut."—Tom Franklin, author of Hell at the Breech and Crooked Letter, Crooked Letter

"A supercharged suspenseful thriller peopled by colorful characters and driven by terrifying events that begin at mach speed and never slow for a moment. Supremely cinematic."
—Joseph Wambaugh, author of the Hollywood Station novels

"The Terror of Living is a smart, swiftly-paced and bloody Western for our moment. Urban Waite is a writer who won't let a reader wander away--he keeps you reading, and reading, and rewards all your attention with a powerhouse story and prose to match."—Daniel Woodrell, author of Winter's Bone and The Bayou Trilogy

"A hell of a good novel, relentlessly paced and beautifully narrated. There's just no let-up. An auspicious debut."

"In Urban Waite's debut novel, The Terror of Living, three men-all on different sides of the law-find their lives tangled up like roots after a heroin delivery goes dead wrong. Deeo in the woods, with rifles blasting and knives flashing, with the gray faces of the mountains looking down at them, they seek revenge and salvation in one another. This is a book for and about men, one of the best of the year."—Benjamin Percy, Esquire

Urban Waite grew up in Seattle and attended the University of Washington on a partial scholarship focused on minority achievement in math and science, preparing him to be the next big Mexican/Italian/Welsh engineer. Instead, he became interested in fiction (where he could make up anything). He went on to study writing at Western Washington U. and Emerson and lives in Seattle with his wife. He is the author of The Terror of Living and Dead If I Don't.
Loading...
or support indie stores by buying on