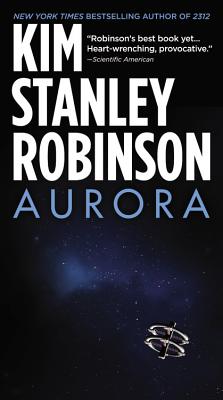 "A rousing tribute to the human spirit."
—San Francisco Chronicle on Aurora

"[Robinson is] a rare contemporary writer to earn a reputation on par with earlier masters such as Isaac Asimov or Arthur C. Clarke."
—Chicago Tribune on Aurora

"Aurora may well be Robinson's best novel...breaks us out of our well-ingrained, supremely well-rehearsed habits of apocalypse - and lets us see the option of a different future than permanent, hopeless standoff."—Los Angeles Review of Books on Aurora

"This ambitious hard SF epic shows Robinson at the top of his game... [A] poignant story, which admirably stretches the limits of human imagination."—Publishers Weekly on Aurora

"This is hard SF the way it's mean to be written: technical, scientific, with big ideas and a fully realized society. Robinson is an acknowledged sf master-his Mars trilogy and his stand-alone novel 2312 (2012) were multiple award winners and nominees-and this latest novel is sure to be a big hit with devoted fans of old-school science fiction."—Booklist on Aurora

"Robinson's extraordinary completeness of vision results in a magnificently realized, meticulously detailed future in which social and biological changes keep pace with technological developments."—Publishers Weekly on 2312

" In his vibrant, often moving new novel, 2312, Robinson's extrapolation is hard-wired to a truly affecting personal love story. [...] Perhaps Robinson's finest novel, 2312 is a treasured gift to fans of passionate storytelling; readers will be with Swan and Wahram in the tunnel long after reaching the last page."—LA Times

"Inherently epic stuff... expect interplanetary strife, conspiracies, more big ideas than most SF authors pack into a trilogy... [yet] this is ultimately in so many respects a book about Earth... a wise and wondrous novel"—SFX on 2312