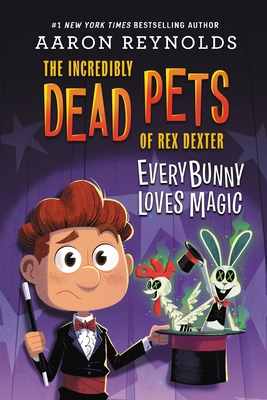 My name is Rex Dexter.

Yes. THAT Rex Dexter. The one cursed with the ability to see and talk to dead animals. The solver of atrocities against the four-footed. The savior of the flipper-finned. Save your standing ovation for later, because I have bigger things on my mind.

And not just anybunny. This particular gaggle of rabbits once belonged to the Astounding Isabel, Middling Falls’ foremost birthday party magician. One thing has quickly become clear…somebunny hates magic. Whoever it is, they’re attempting to put the Astounding Isabel out of the birthday biz for good. And they’re willing to whack a whole lotta bunnies to do it.

It’s a cold cruel world out there. But don’t worry. I’m on the case. And so is Darvish. And Drumstick. And possibly several dozen rabbits. The point is, nobunny pulls one over on Rex Dexter…and his best friend…and his dead chicken.

Praise for The Incredibly Dead Pets of Rex Dexter:

* "In this entertainingly spooky romp, Reynolds tempers his morbid premise with the absurdity of Rex's situation, the ghostly entourage's distinct personalities, and a hilarious, simultaneously formal and sarcastic, narrative voice."

"The mystery has a twist ending that will surprise and satisfy readers who thought they knew what was coming.... Purchase where funny books are popular -- that's everywhere, right?"

"Reynolds is bound to attract fans drawn to overconfident Rex and whatever challenge the Grim Reaper cares to deal him."—BCCB

Aaron Reynolds is a New York Times bestselling author and has written many highly acclaimed books for kids, including DUDE!, Creepy Pair of Underwear, Caveboy Dave, the Caldecott Honor-winning Creepy Carrots, and the Incredibly Dead Pets of Rex Dexter series. Aaron lives in Chicago with his wife, two kids, four cats, and anywhere between zero and ten goldfish, depending on the day.