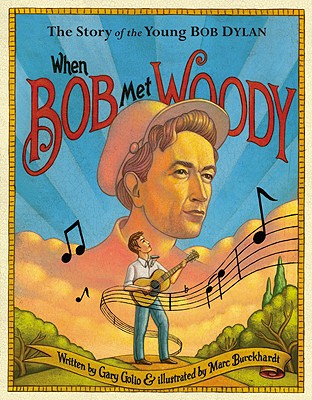 The Story of the Young Bob Dylan

An enchanting, true story of the 2016 Nobel Prize in Literature winner, Bob Dylan, and his mentor, Woody Guthrie.

When Bob finished, Woody's face lit up like the sun.

Bob Dylan is a musical icon, an American legend, and, quite simply, a poet. But before he became Bob Dylan, he was Bob Zimmerman, a kid from rural Minnesota.

This lyrical and gorgeously illustrated picture book biography follows Bob as he renames himself after his favorite poet, Dylan Thomas, and leaves his mining town to pursue his love of music in New York City. There, he meets his folk music hero and future mentor, Woody Guthrie, changing his life forever.

This is Gary Golio's second picture book. He lives in New York's Hudson Valley with his wife, author Susanna Reich, a cat, and a fire-bellied toad.

Marc Burckhardt was born in Germany, but grew up as a proud Texan. He graduated from Baylor University and now teaches illustration at Texas State University. He lives in Austin, TX.
Loading...
or
Not Currently Available for Direct Purchase