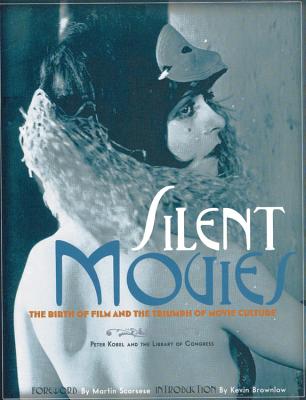 The Birth of Film and the Triumph of Movie Culture

Drawing on the extraordinary collection of The Library of Congress, one of the greatest repositories for silent film and memorabilia, Peter Kobel has created the definitive visual history of silent film. From its birth in the 1890s, with the earliest narrative shorts, through the brilliant full-length features of the 1920s, Silent Movies captures the greatest directors and actors and their immortal films.

Silent Movies also looks at the technology of early film, the use of color photography, and the restoration work being spearheaded by some of Hollywood's most important directors, such as Martin Scorsese and Francis Ford Coppola.

Richly illustrated from the Library of Congress's extensive collection of posters, paper prints, film stills, and memorabilia -- most of which have never been in print -- Silent Movies is an important work of history that will also be a sought-after gift book for all lovers of film.

Praise For Silent Movies: The Birth of Film and the Triumph of Movie Culture…

"If you ever wondered why film buffs get weak in the knees about the movies made before talkies, this book can help you understand. . . . it is beautifully designed with a dazzling array of movie stills, posters and promo material drawn from the Library of Congress' memorabilia collection." —San Francisco Chronicle

"A ravishing, oversize, million-pound study of the silent movie era, not just its films, but its promotion, its culture and the way these movies changed how we think about the world." —Washington Post Express

"Kobel has lovingly detailed this world-from the zany publicity campaigns to the lavish scripts to the decadent star lifestyles. SILENT MOVIES is an essential addition to any film or design lover's library."  —Encore magazine

This isn't a coffee table book, though any coffee table would be lucky to be graced by it. The excellent text manages the trick of being exhaustive without being exhausting, while the photos--and stills, and posters, and lobby cards--are enchanting. —Joe Morgenstern, Wall Street Journal Online

Peter Kobel is the former managing editor of Premiere magazine, and has written for the New York Times, the Los Angeles Times, the Wall Street Journal, and Entertainment Weekly.

Martin Scorsese is one of the most respected and influential directors working today. He also serves as president of the Film Foundation, a non-profit organization dedicated to film preservation.

Kevin Brownlow is a noted film historian and has written extensively on early film, including The Parade's Gone By and Behind the Mask of Innocence.
Loading...
or
Not Currently Available for Direct Purchase