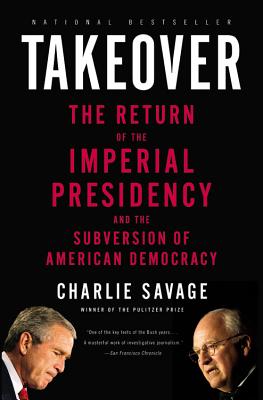 In 1789, the Founding Fathers came up with a system of checks and balances to keep kingly powers out of the hands of American presidents. But in the 1970s and '80s, a faction of Republican loyalists, outraged by the fall of the imperial presidency after Watergate and the Vietnam War, abandoned conservatives' traditional suspicion of concentrated government power. These men hatched a plot that would allow the White House to return to, or even surpass, the virtually unchecked powers that Richard Nixon had briefly tried to wield. Congress would be defanged, and the commander-in-chief would be able to assert a unilateral dominance both at home and abroad.

Today, this plot is coming to fruition. As Takeover reveals, the Bush-Cheney administration has succeeded in seizing vast powers for the presidency by throwing off many of the restraints placed upon it by Congress, the courts, and the Constitution. This timely book unveils the secret machinations behind the headlines, explaining the links between warrantless wiretapping and the President Bush's Supreme Court nominees, between the torture debate and the secrecy surrounding Vice President Cheney's energy task force, and between the "faith-based initiative" and the holding of US citizens without trial as "enemy combatants." It tells, for the first time, the full story of a hidden agenda three decades in the making, laying out how a group of true believers set out to establish monarchical executive powers that, in the words of one conservative critic, "will lie around like a loaded weapon" ready to be picked up by any future president.

Brilliantly reported and deftly told, Takeover is a searing investigation into how the constitutional balance of our democracy is in danger of being permanently altered. For anyone who cares about America's past, present, and future, it is essential reading.

Pulitzer Prize-winning journalist Charlie Savage is a Washington correspondent for the New York Times and has been covering post-9/11 legal policy issues since 2003. A native of Fort Wayne, Indiana, he graduated from Harvard College and holds a master's degree from Yale Law School. His first book, Takeover, a bestselling and award-winning account of the Bush-Cheney administration's efforts to expand presidential power, was named one of the best works of 2007 by the Washington Post, Slate, and Esquire.
or support indie stores by buying on