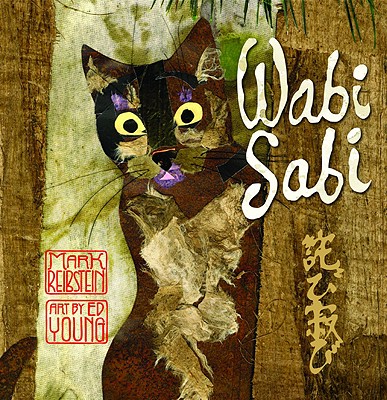 Wabi Sabi, a little cat in Kyoto, Japan, had never thought much about her name until friends visiting from another land asked her owner what it meant.

At last, the master says, "That's hard to explain." And
That is all she says.

This unsatisfying answer sets Wabi Sabi on a journey to uncover the meaning of her name, and on the way discovers what wabi sabi is: a Japanese philosophy of seeing beauty in simplicity, the ordinary, and the imperfect.

Mark Reibstein is an English teacher and writer who has lived in New York, California, Hawaii, Japan, and Thailand. Now Mark and his daughter live near San Francisco with their good friend Arlo, who is also a cat. This is his first picture book.

Ed Young has illustrated for over 70 books and has been awarded the Caldecott Medal for Lon Po Po and the Caldecott Honors for Seven Blind Mice and The Emperor and the Kite. He lives in upstate New York with his daughters.