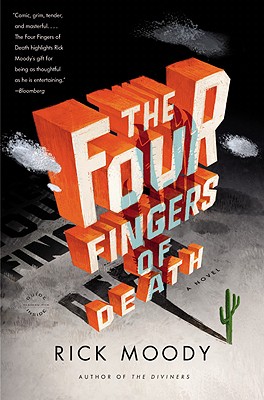 The Four Fingers of Death

Montese Crandall is a downtrodden writer whose rare collection of baseball cards won't sustain him, financially or emotionally, through the grave illness of his wife. Luckily, he swindles himself a job churning out a novelization of the 2025 remake of a 1963 horror classic, The Crawling Hand. Crandall tells therein of the United States, in a bid to regain global eminence, launching at last its doomed manned mission to the desolation of Mars. Three space pods with nine Americans on board travel three months, expecting to spend three years as the planet's first colonists. When a secret mission to retrieve a flesh-eating bacterium for use in bio-warfare is uncovered, mayhem ensues.

Only a lonely human arm (missing its middle finger) returns to earth, crash-landing in the vast Sonoran Desert of Arizona. The arm may hold the secret to reanimation or it may simply be an infectious killing machine. In the ensuing days, it crawls through the heartbroken wasteland of a civilization at its breaking point, economically and culturally -- a dystopia of lowlife, emigration from America, and laughable lifestyle alternatives.

The Four Fingers of Death is a stunningly inventive, sometimes hilarious, monumental novel. It will delight admirers of comic masterpieces like Slaughterhouse-Five, The Crying of Lot 49, and Catch-22.

Praise For The Four Fingers of Death: A Novel…

"[A] comic tour de force...Moody is at his most daring and arresting."
—James Gibbons, BookForum

"Moody's powers of invention, his ease in his own prose, his ability to develop interesting characters--in short, his enormous gifts as a writer--are on full display here. And when he wants to write a gorgeous paragraph, he delivers as you know he can, even when he's still spoofing."
—Clancy Martin, The New York Times Book Review

"A grab bag of sardonic fun."
—The Dallas Morning News

"Moody's foremost accomplishment....Moves with unapologetic swagger, as it flaunts the extremes of storytelling."
—John Domini, Bookslut

"As pulpy... as The Four Fingers of Death might sound, it's oddly something sweeter and more profound."—Associated Press

"Sci-fi as only Moody could write it--in turns touching and outrageous."
—"Very Short List," The Observer