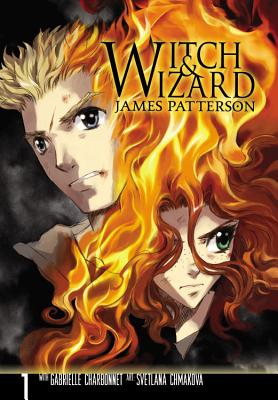 Imagine waking up to find that the world around you - life as you know it - has changed in an instant. That's what happens to Whit Allgood and his sister, Wisty. They thought that they were just a couple of normal teenagers, until their rude awakening at the hands of a dozen armed police! Charged with being a wizard and a witch, accused of having incredible powers they never dreamed possible, the siblings find themselves the targets of an upstart political regime, The New Order, which has swept the country and vowed to wipe "their kind" from existence. Now Whit and Wisty must fight for both their freedom and their lives as they unlock the powers burning inside of them!

Svetlana Chmakova was born and raised in Russia until the age of 16, when her family emigrated to Canada. She quickly made a name for herself with works like Dramacon, Nightschool, the manga adaptation of James Patterson's Witch & Wizard, and the webcomic Chasing Rainbows. She graduated from Sheridan College with a three-year Classical Animation Diploma. Her latest work for middle grade readers, Awkward, has been a runaway critical success and was named one of YALSA's 2016 Top Ten Great Graphic Novels for Teens! James Patterson has had more New York Times bestsellers than any other writer, ever, according to Guinness World Records. Since his first novel won the Edgar Award in 1977 James Patterson's books have sold more than 300 million copies. He is the author of the Alex Cross novels, the most popular detective series of the past twenty-five years, including Kiss the Girls and Along Came a Spider. He writes full-time and lives in Florida with his family.
or
Buy Here
Copyright © 2020 American Booksellers Association