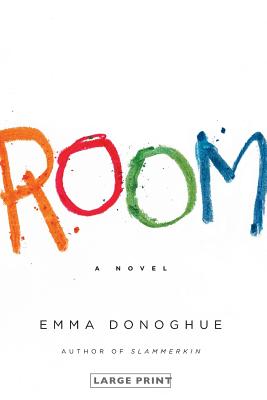 The award-winning bestseller that became one of the most talked about and memorable novels of the decade, Room is "utterly gripping...a heart-stopping novel" (San Francisco Chronicle).   Held captive for years in a small shed, a woman and her precocious young son finally gain their freedom, and the boy experiences the outside world for the first time.

To five-year-old-Jack, Room is the world. It's where he was born, it's where he and his Ma eat and sleep and play and learn. At night, his Ma shuts him safely in the wardrobe, where he is meant to be asleep when Old Nick visits.

Room is a tale at once shocking, riveting, exhilarating — a story of unconquerable love in harrowing circumstances, and of the diamond-hard bond between a mother and her child.

"Powerful.... Seen entirely through Jack's eyes and childlike perceptions, the developments in this novel--there are enough plot twists to provide a dramatic arc of breathtaking suspense--are astonishing.... Donoghue brilliantly portrays the psyche of a child raised in captivity...will keep readers rapt."—Publishers Weekly

"a novel so disturbing that we defy you to stop thinking about it, days later.... This blend of allegory and true crime (Donoghue has said she was influenced by several recent news stories) is beautifully served by Jack's wise but innocent voice.... And while a first-person, child-narrated tale can sometimes feel like a gimmick, the enviable trick here is that Donoghue makes you want to stay with Ma and Jack, whether they're in their own private prison or out in the so-called free world."—Sara Nelson, O Magazine

"one of the most affecting and subtly profound novels of the year"—Ron Charles, The Washington Post

"a riveting, powerful novel.... Donoghue's inventive storytelling is flawless and absorbing. She has a fantastic ability to build tension in scenes where most of the action takes place in the 12-by-12 room where her central characters reside. Her writing has pulse-pounding sequences that cause the reader's eyes to race over the pages to find out what happens next.... Room is likely to haunt readers for days, if not longer. It is, hands down, one of the best books of the year."—Liz Raftery, The Boston Globe

"remarkable.... Jack's voice is one of the pure triumphs of the novel: in him, she has invented a child narrator who is one of the most engaging in years - his voice so pervasive I could hear him chatting away during the day when I wasn't reading the book. Donoghue rearranges language to evoke the sweetness of a child's learning without making him coy or overly darling; Jack is lovable simply because he is lovable.... This is a truly memorable novel, one that can be read through myriad lenses - psychological, sociological, political. It presents an utterly unique way to talk about love, all the while giving us a fresh, expansive eye on the world in which we live."