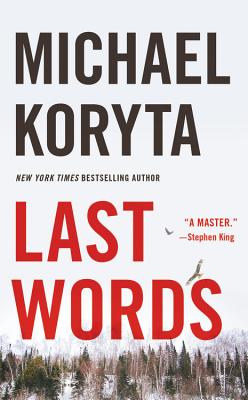 Markus Novak just wants to come home. An investigator for a Florida-based Death Row defense firm, Novak's life derailed when his wife, Lauren, was killed in the midst of a case the two were working together. Two years later, her murderer is still at large, and Novak's attempts to learn the truth about her death through less-than-legal means and jailhouse bargaining have put his job on the line. Now he's been all but banished, sent to Garrison, Indiana to assess a cold case that he's certain his boss has no intention of taking.

As Novak knows all too well, some crimes never do get solved. But it's not often that the man who many believe got away with murder is the one calling for the case to be reopened. Ten years ago, a teenaged girl disappeared inside an elaborate cave system beneath rural farmland. Days later, Ridley Barnes emerged carrying Sarah Martin's lifeless body. Barnes has claimed all along that he has no memory of exactly where -- or how -- he found Sarah. His memory of whether she was dead or alive at the time is equally foggy. Tired of living under a cloud of suspicion, he says he wants answers -- even if they mean he'll end up in the electric chair.

But what's he really up to? And Novak knows why he's so unhappy to be in Garrison -- but why are the locals so hostile towards him? The answers lie in the fiendish brain of a dangerous man, the real identity of a mysterious woman, and deep beneath them all, in the network of ancient, stony passages that hold secrets deadlier than he can imagine. Soon Novak is made painfully aware that if he has any chance of returning to the life and career he left behind in Florida, he'll need to find the truth in Garrison first.

"An inventive storyteller who's also a skilled stylist, he's constantly experimenting, which explains why his private eye novel Last Words doesn't read like one...even on a literal level, Koryta's descriptions of that unknown realm beneath the one we know - with places like the Chapel Room and Maiden Creek and Greenglass River - possess an unearthly beauty. You almost begin to believe...that it's all one big cave down there, with endless interconnected rooms stretching into infinity."—Marilyn Stasio, The New York Times

"This moving series launch from bestseller Koryta (Those Who Wish Me Dead) illustrates why he's among today's top thriller writers. Koryta sensitively portrays regret and grief while plunging the reader into exciting, claustrophobic scenes deep inside the massive cave."—Publishers Weekly (starred)

"Outstanding launch of a new series. Koryta punctuates the intense underground scenes of Last Words with claustrophobia so realistic that it's palpable. He wrings every moment of excitement possible."—Associated Press

"Koryta knows what he's talking about. The last page of Last Words hints at the plot of Koryta's next novel, and I say bring it on."—The Washington Post

"Last Words might not make you eager to go underground yourself, but it will make you avid to keep turning the pages....a promising series kickoff; just be sure to read it in daylight."—Tampa Bay Times

"Koryta is a master of plot."—Bob Cunningham, Toledo Blade

"With each book, the talents of New York Times best-selling author Koryta (The Prophet) just get better."—Library Journal (starred)

ACCLAIM FOR THOSE WHO WISH ME DEAD:
"Warning: Michael Koryta's wonderful, riveting, and harrowing Those Who Wish Me Dead may just move you to tears. Enjoy at your own risk."—Harlan Coben, #1 bestselling author of Missing You and Six Years

"Those Who Wish Me Dead is an absolutely thrilling read. I read most of it with my breath held, occasionally exhaling to ask myself, 'What will happen next?' I highly recommend it."—Kevin Powers, National Book Award Finalist and author of The Yellow Birds