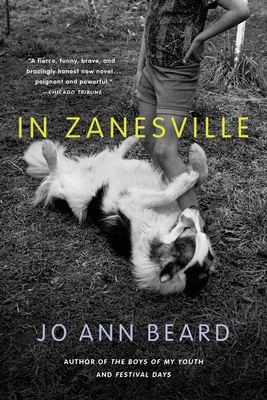 From the acclaimed author of The Boys of My Youth, a “mesmerizing… beautifully written” debut novel that evokes the wrenching, exquisite moment just before we step into adulthood (Ann Patchett, Pulitzer-Prize finalist)

The beguiling fourteen-year-old narrator of In Zanesville is a late bloomer. She is used to flying under the radar-a sidekick, a third wheel, a marching band dropout, a disastrous babysitter, the kind of girl whose Eureka moment is the discovery that "fudge" can't be said with an English accent.

Luckily, she has a best friend, a similarly undiscovered girl with whom she shares the everyday adventures of a 1970s American girlhood, incidents through which a world is revealed, and character is forged.

In time, their friendship is tested—by their families' claims on them, by a clique of popular girls who stumble upon them as if they were found objects, and by the first, startling, subversive intimations of womanhood.

With dry wit and piercing observation, Jo Ann Beard shows us that in the seemingly quiet streets of America's innumerable Zanesvilles is a world of wonders, and that within the souls of the awkward and the overlooked often burns something radiant and unforgettable.

Praise For In Zanesville: A Novel…

PRAISE FOR IN ZANESVILLE:

"An exuberant first novel....Beard has a knack for melding the funny and the sad, amplifying small moments into something big."—Sussannah Meadows, New York Times

"An exuberant first novel....Beard has a knack for melding the funny and the sad, amplifying small moments into something big."—Susannah Meadows, New York Times

"A sure-handed first novel ....It's impossible not to be charmed."—Yvonne Zipp, Washington Post

"A smashing coming-of-age story.... Beard is a faultless chronicler of the young and hopeful; readers couldn't ask for a better guide for a trip through the wilds of adolescence."—Publishers Weekly

"Beard has beautifully captured how a shy but observant girl might interpret the awkwardness and the struggle for acceptance in the high school's perplexing social milieu.... Resonates as a bittersweet remembrance."—Kirkus

"Jo Ann Beard has written a mesmerizing account of a time in a girl's life when every moment, every action, is laden with enormous importance. It is so beautifully written, so perfect in its pitch, that I couldn't put it down."—Ann Patchett, author of Run

"Full of charm and wisdom and laugh-out-loud humor, In Zanesville will have readers recalling their own years of wonder and want and fear and doubt. I loved literally every character, every scene."—Elizabeth Berg, author of Once Upon a Time, There Was You

"Beard is a writer of immense talents. In Zanesville is far more than a coming-of-age novel. Our offbeat narrator is spellbinding in her bold vivacity and honesty, an unforgettable character quickly embraced and beloved at the center of our lives."—Howard Norman, author of What Is Left the Daughter

"Beard has a sharp eye, a wry wit, and a warm heart, and in her new book, she has captured perfectly not only a particular era in American life, but an evanescent moment in one beautifully evoked life. I loved this book."—James Hynes, author of Next

"In Zanesville is told by a narrator attuned to the humor and tragedy around her, battling it with her own desperate logics. This novel is an amazing demonstration of friendship, the most necessary and slippery thing we can possess."—Peter Rock, author of My Abandonment

Jo Ann Beard is the author of the groundbreaking collection of autobiographical essays, The Boys of My Youth, and the novel, In Zanesville. Her work has appeared in The New Yorker, Tin House, Best American Essays, and other magazines and anthologies. She has received a Whiting Foundation Award and nonfiction fellowships from the John Simon Guggenheim Foundation and the New York Foundation for the Arts. She teaches writing at Sarah Lawrence College.
Loading...
or support indie stores by buying on