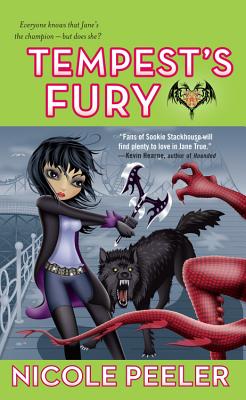 Jane's not happy. She's been packed off to England to fight in a war when she'd much rather be snogging Anyan. Unfortunately, Jane's enemies have been busy stirring up some major trouble -- the kind that attracts a lot of attention. In other words, they're not making it easy for Jane to get any alone time with the barghest, or to indulge in her penchant for stinky cheese.

Praying she can pull of a Joan of Arc without the whole martyrdom thing, Jane must lead Alfar and halflings alike in a desperate battle to combat an ancient evil. Catapulted into the role of Most Unlikely Hero Ever, Jane also has to fight her own insecurities as well as the doubts of those who don't think she can live up to her new role as Champion.

Along the way, Jane learns that some heroes are born. Some are made. And some are bribed with promises of food and sex.

Praise for the Jane True series:

" Peeler pulls out all the stops in this heart-stopping tale with a cliffhanger ending that will leave you gasping!" - RT Book Reviews (Top Pick!) on Tempest's Fury

"Jane is sure to endear herself to new readers with her charm, sass, and vulnerability, while longtime fans will be thrilled by her magical and emotional growth." --- Publishers Weekly

"Witty and fun, with a dash of dark suspense." --- Scifichick.com

"A new star is rising in the urban fantasy world. With her Jane True character, Peeler launches a first-person series that's an exciting journey of self-discovery and murder mystery." --- RT Book Reviews (4-1/2 Stars)

"Grounded equally in ancient myth and the challenges of modern life, Jane True lives up to her name ... true, and truly unique! A fascinating, fast-paced, sexy storm of a book." --- Rachel Caine

Nicole Peeler writes urban fantasy and is an associate professor at Seton Hill University, where she co-directs their MFA in Writing Popular Fiction. She is the author of the award-winning Jane True series and Jinn and Juice, the first book in a series about a cursed jinni living in Pittsburgh. Nicole also lives in Pittsburgh, although she's neither cursed nor a jinni.
Loading...
or support indie stores by buying on
(This book is on backorder)