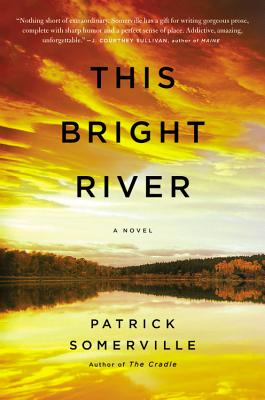 From a writer and producer of HBO's acclaimed apocalyptic drama series The Leftovers comes a compelling story of young love and old secrets.

Ben Hanson's aimless life has bottomed out after a series of bad decisions, but an unexpected offer from his father draws him home to Wisconsin. There, he finds his family fractured, still reeling from his cousin's mysterious death a decade earlier.

Lauren Sheehan abandoned her career in medicine after a series of violent events abroad. Now she's back in the safest place she knows -- the same small Wisconsin town where she and Ben grew up -- hiding from a world that has only brought her heartache.

As Lauren cautiously expands her horizons and Ben tries to unravel his family's dark secrets, their paths intersect. Could each be exactly what the other needs?

A compelling family drama and a surprising love story, This Bright River is the work of a natural storyteller, one whose dark humor and piercing intelligence provide constant, lasting delights.

Praise For This Bright River: A Novel…

PRAISE FOR THIS BRIGHT RIVER:

"Serpentine and hypnotic, This Bright River depicts two vivid characters knocked hard by life, on a perilous journey that reveals the weight and pull of family history. The result is a novel that is both intimate and mysterious, harrowing and brave."—Megan Abbott, author of The End of Everything and Dare Me

"This Bright River is a flood of virtuoso prose and characterization. Mystery, memory, pain, and a courageous strand of love are interwoven in a riveting narrative of voices, all singing, all merging into the singular vision of one of American literature's young masters."—Nic Pizzolatto, author of Galveston

"This Bright River is nothing short of extraordinary. Somerville has a gift for writing gorgeous prose, complete with sharp humor and a perfect sense of place. But that's only half the story. There's also a great romance here and a shocking set of mysteries that get untangled along the way. Addictive, amazing, unforgettable."—J. Courtney Sullivan, bestselling author of Maine

Each paragraph has at least one striking or hilarious line. Every few pages manage to bear the full weight of a short story. Dialogue snaps with a bizarre aptness reminiscent of Denis Johnson, and the novel in total presents a coiled, deeply sensitive intelligence....Go buy this book.
—The Daily Beast

If there's a middle ground between the pot-boiling, page-turning mystery and the novel of Big Ideas, Patrick Somerville has found it. "This Bright River," his second novel, is a serious literary tragedy of errors that also tells a gripping story.... The extent of Somerville's control over his narrative becomes apparent when the novel's back stories and present goings-on finally converge at that cabin in the wilderness. The slow revelation of a host of family secrets is handled so deftly you won't even mind getting sand in your Kindle.
—Andrew Ervin, The New York Times Book Review

Patrick Somerville is the author of two novels -- This Bright River and The Cradle -- and two books of short stories -- Trouble and The Universe in Miniature. He is also a writer and producer on HBO's acclaimed drama series The Leftovers. He lives with his wife and three children in Los Angeles.
Loading...
or
Not Currently Available for Direct Purchase