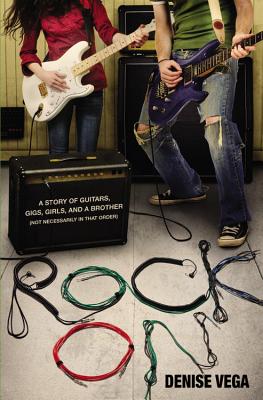 A story of guitars, gigs, girls, and a brother (not necessarily in that order)

Ori Taylor is the lead singer, guitarist, and songwriter of the Band To Be Named Later, a garage band he started with his friends. After years of being known only as the kid brother of sports star Del, Ori is looking forward to stepping out of his older brother's shadow, learning to perform in public, and rocking the Battle of the Bands contest. Oh, and maybe finally working up the nerve to talk to a girl in person instead of just over e-mail. But when Del suddenly returns from college, he expects Ori to step back into his role of little brother, just when Ori is starting to come into his own.

With his confidence wavering, will Ori be able to overcome his stage fright and lead the band to rock glory? Will the Band To Be Named Later ever get a real name? Will their best performances remain in the garage?

Denise Vega's deft exploration of brothers, bands, friends, and crushes promises to have readers tuning in page after page, because among all the ups and downs of being a teen, one thing's for sure: We all just want to rock on.

Praise For Rock On: A story of guitars, gigs, girls, and a brother (not necessarily in that order)…

"In this thoughtful tale, sibling rivalry is taken to the next level. Both Ori and Del prove to be likable characters in their own respective ways."
—SLJ

"Vega has imbued her tale with well-developed characters...readers will appreciate Ori's gently self-deprecating humor and the lively Web postings and texts woven throughout that help tell the story."
—Kirkus Reviews

"Ori's honest voice will have readers caring about the outcome...Blog entries from the band's Web site are interspersed, giving an amusing glimpse of the drama among the band's budding groupies, while third-person flashbacks to Ori's younger days take readers behind the music-and behind Ori and Del's strained relationship."
—Publishers Weekly

"Readers will feel like they have insider information on what it is like to be in a band....This book will be enjoyed by teens who like music, poetry, or a good family story."
—VOYA

"Engaging and smartly paced....Vega has a way with details, creating a pattern of incidents and emotional beats that builds assuredly to the final face-offs between bands and brothers. Likable three-dimenstional characters and rock-solid friendships add considerable appeal to this feel-good tale."
—The Bulletin

Denise Vega can't play an instrument to save her life, but she loves music, especially rock and roll. Denise wrote and illustrated her first book when she was twelve and is the author of Click Here, Access Denied, and Grandmother, Have the Angels Come?
Loading...
or
Not Currently Available for Direct Purchase