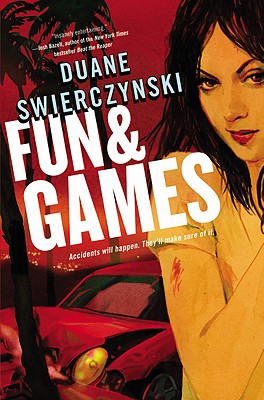 Charlie Hardie, an ex-cop still reeling from the revenge killing of his former partner's entire family, fears one thing above all else: that he'll suffer the same fate.

Languishing in self-imposed exile, Hardie has become a glorified house sitter. His latest gig comes replete with an illegally squatting B-movie actress who rants about hit men who specialize in making deaths look like accidents. Unfortunately, it's the real deal. Hardie finds himself squared off against a small army of the most lethal men in the world: The Accident People.

It's nothing personal-the girl just happens to be the next name on their list. For Hardie, though, it's intensely personal. He's not about to let more innocent people die. Not on his watch.

"Duane Swierczynski is a much-needed breath of fresh air in the book world. Sure, he starts with established archetypes and classic story lines. But he makes them new and making them new makes them fun. This guy is a great storyteller. I never know what he is going to come up with or where he is going to take me. I just know I won't be complaining about a thing once I get there."—Michael Connelly

"Breathless action. So much fun to read-on the couch or on the run."—Marilyn Stasio, The New York Times Book Review

"Brilliant ... one hell of a roller coaster read. Mr. Swierczynski writes like Elmore Leonard on adrenaline and speed."—New York Journal of Books

"With Fun & Games, Swierczynski has pushed his style to its farthest extreme yet, and from the looks of things, the rest of the trilogy is going to go even further; he has the chops pull it off like the perfect heist."—Los Angeles Review of Books

"Swierczynski steps on the gas early in this pulse-pounding contemporary thriller and doesn't let up . . . an unforgettable climax . . . the sequel's appearance won't be too soon for many readers."—Publishers Weekly (starred review)

"A load of high octane taught action.Readers who like their action fast, brutal, and smart, as well as fans of the Die Hard franchise, will be eagerly awaiting the next installment."—Library Journal

"More exciting than whatever you're reading right now, this is Duane's breakout novel."—Ed Brubaker, Harvey- and Eisner-Award-winning author of Criminal and Incognito

"A white-hot nuclear explosion."—Joe R. Lansdale, Edgar Award-winning author of The Bottoms, Leather Maiden, and the Hap and Leonard series

"Cool, suspenseful, tragic, and funny as hell, Fun and Games is Duane Swierczynski's best yet. I haven't had this much fun reading in a long time."—Sara Gran, author of Dope and Come Closer

"An audacious, propulsive thrill ride that kidnapped me on page one and didn't look back."—Brian Azzarello, Harvey- and Eisner-Award-winning author of 100 Bullets and Loveless

Duane Swierczynski is the Edgar-nominated author of nine novels including Canary, Severance Package, and the Shamus Award-winning Charlie Hardie series (Fun and Games, Hell and Gone, Point and Shoot). He's written over 250 comics for Marvel, DC, Dark Horse, Valiant and IDW, including The Black Hood, the first comic for Archie's Dark Circle imprint. Swierczynski has also collaborated with CSI creator Anthony E. Zuiker on the bestselling Level 26 series. He lives in Burbank with his wife and children.