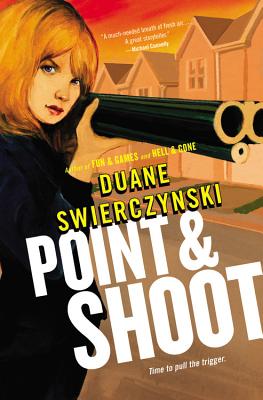 Charlie Hardie finds himself in a steel box, tubes and wires attached to his body, trapped inside a satellite parked in orbit 500 miles above the Earth. He's got a year's supply of food, air, water, and no communication back to Earth, and must complete his 12 months' duty or his wife and son will have an "accident."

But when someone all-too-familiar docks on the satellite, informs Hardie he's sitting in a veritable zero-G vault containing the world's most dangerous secrets, and forces a crash-landing in the middle of the Pacific Ocean, Hardie must decide whether he's come face-to-face with the partner he needs to save his family -- or with his nemesis. After years of exile, Hardie's arming up....and heading home.

Praise For Point and Shoot…

"Frenetic prose...Readers are in for a wild and immensely enjoyable ride."—Publishers Weekly

"The action sequences are killer. I could esily see these books as a major summer blockbuster."—Wired.com

"A much-needed breath of fresh air in the book world."—Michael Connelly

Duane Swierczynski is the Edgar-nominated author of nine novels including Canary, Severance Package, and the Shamus Award-winning Charlie Hardie series (Fun and Games, Hell and Gone, Point and Shoot). He's written over 250 comics for Marvel, DC, Dark Horse, Valiant and IDW, including The Black Hood, the first comic for Archie's Dark Circle imprint. Swierczynski has also collaborated with CSI creator Anthony E. Zuiker on the bestselling Level 26 series. He lives in Burbank with his wife and children.
Loading...
or support indie stores by buying on