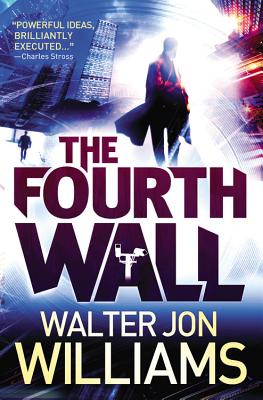 Dagmar Shaw got out of the game... and into the movies. Sean is a washed-up child actor reduced to the lowest dregs of reality television to keep himself afloat. His life was a downward spiral of alcoholism, regret, and failure... until he met Dagmar. Except Sean has secrets, dark even for the Hollywood treadmill of abuse, addiction, and rehab. And Dagmar is a cipher. There are dark rumors about her past, the places she's been, the things she was involved in. People tend to die around her and now, she wants Sean for something. A movie, she says, but with her history, who's to say what her real game is?

Walter Jon Williams has been nominated repeatedly for every major SF award, including Hugo and Nebula Award nominations for his novel City on Fire. His most recent books are The Sundering, The Praxis, Destiny's Way, and The Rift. Walter Jon Williams lives near Albuquerque, New Mexico, with his wife.

Praise For The Fourth Wall…

"The blending of myster-thriller, SF,
and traditional Hollywood-story elements is hugely successful. Surely the best of the Dagmar Shaw series and one of the author's finest novels."

"There are powerful ideas stirring beneath the skin of what to a first approximation resembles a taut technothriller, and it's brilliantly executed." --- Charles Stross on Deep State


"The characters are realistic and absorbing, and the story deeply compelling." --- Publishers Weekly (Starred Review) on This Is Not a Game


"This Is Not a Game succeeds not only as a suspense novel, but as an incisive portrait of a subculture for whom reality is increasingly contingent, and increasingly mediated." --- Locus


"Williams asks some tough questions about the boundary between games and reality, and shows how in the end, the only thing we can be sure is real is the communities we create, and the games we play together." --- io9.com on This Is Not a Game