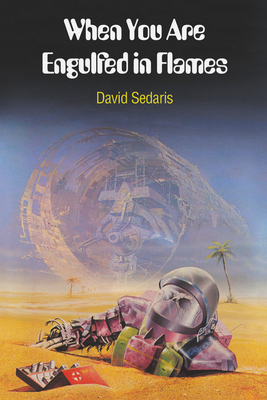 When You Are Engulfed in Flames

"David Sedaris's ability to transform the mortification of everyday life into wildly entertaining art," (The Christian Science Monitor) is elevated to wilder and more entertaining heights than ever in this remarkable new book.
Trying to make coffee when the water is shut off, David considers using the water in a vase of flowers and his chain of associations takes him from the French countryside to a hilariously uncomfortable memory of buying drugs in a mobile home in rural North Carolina. In essay after essay, Sedaris proceeds from bizarre conundrums of daily life-having a lozenge fall from your mouth into the lap of a fellow passenger on a plane or armoring the windows with LP covers to protect the house from neurotic songbirds-to the most deeply resonant human truths.  Culminating in a brilliant account of his venture to Tokyo in order to quit smoking, David Sedaris's sixth essay collection is a new masterpiece of comic writing from "a writer worth treasuring" (Seattle Times).

Praise for When You Are Engulfed in Flames:

"Older, wiser, smarter and meaner, Sedaris...defies the odds once again by delivering an intelligent take on the banalities of an absurd life." --Kirkus Reviews

This latest collection proves that not only does Sedaris still have it, but he's also getting better....Sedaris's best stuff will still--after all this time--move, surprise, and entertain."  --Booklist

It's Catching
Keeping Up
The Understudy
This Old House
Buddy, Can You Spare a Tie?
Road Trips
What I Learned
That's Amore
The Monster Mash
In the Waiting Room
Solutions to Saturday's Puzzle
Adult Figures Charging Toward a Concrete Toadstool
Memento Mori
All the Beauty You Will Ever Need
Town and Country
Aerial
The Man in the Hut
Of Mice and Men
April in Paris
Crybaby
Old Faithful
The Smoking Section

"It's not just that Sedaris's crisp prose is humorous. What makes his work a consistent joy to read is his deliciously skewed vision of the world, and his deadpan delivery."—Christopher Muther, Boston Globe

"The Sedaris genius is to be incredibly particular, not to mention peculiar, and yet take fantastic and rapid leaps to the universal. . . . He'll be telling some weird story, and all of a sudden, just at the end, it turns out not only to be about him, but also about you. He's a master at evoking fellow feeling."—Nancy Dalva, New York Observer

"David Sedaris is horribly observant. He sees things as they are.... He'll be telling some weird story, and all of a sudden, just at the end, it turns out not only to be about him, but also about you."—Nancy Dalva, New York Observer

"What makes Sedaris's work transcendent is its humanity: He adores some truly awful people, yet he invests them with dignity and even grace.... He's the best there is."—Judith Newman, People

"The preeminent humorist of his generation...His reluctant charm and talent for observing every inch of the human condition remain intact." —Whitney Pastorek, Entertainment Weekly

"Sedaris is certainly worthy of hero worship-he so breezily translates the landscape through his bent, prismatic view that he makes you forget what a skillful narrator he is."—Mark Washburn, Charlotte Observer

David Sedaris is the author of the books Dress Your Family in Corduroy and Denim, Me Talk Pretty One Day, Holidays on Ice, Naked, and Barrel Fever. He is a regular contributor to The New Yorker and Public Radio International's "This American Life."
Loading...
or support indie stores by buying on