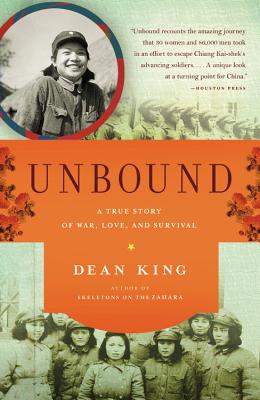 A True Story of War, Love, and Survival

In October 1934, the Chinese Communist Army found itself facing annihilation, surrounded by hundreds of thousands of Nationalist soldiers. Rather than surrender, 86,000 Communists embarked on an epic flight to safety. Only thirty were women. Their trek would eventually cover 4,000 miles over 370 days. Under enemy fire they crossed highland awamps, climbed Tibetan peaks, scrambled over chain bridges, and trudged through the sands of the western deserts. Fewer than 10,000 of them would survive, but remarkably all of the women would live to tell the tale.

Unbound is an amazing story of love, friendship, and survival written by a new master of adventure narrative.

Dean King is the author of the national bestseller Skeletons on the Zahara. He has written for many publications, including Men's Journal, Esquire, Garden & Gun, Granta, Outside, New York Magazine, and the New York Times. He lives in Richmond, Virginia.

Praise For Unbound: A True Story of War, Love, and Survival…

"King spent five years traveling the length of the Long March, interviewing those women still alive to tell their tales. Theirs are stories of courage, remarkable not only because of the physical and psychological rigors of their journey, but also because of their determination...China has always been a mysterious and secretive empire, but Unbound peels back the curtain to reveal a story of strength and survival."—John T. Slania, Bookpage

"Fascinating...King, the best-selling author of Skeletons on the Zahara, has done brilliant work bringing the march to life with a plethora of vivid, well-researched details...Unbound is an authoritative account of the Long March, but its evocations of the marchers' experiences will linger long after the historical details slip from readers' memories."—Doug Childers, The Richmond Times-Dispatch

"Unbound recounts the amazing journey that 30 women and 86,000 men took in an effort to escape Chaing Kai-shek's advancing soldiers...Threading the narratives of the women's individual stories, women's place in China at the time, and the progress of the March with an overall picture of modern Chinese history, King gives readers a unique look at a turning point for [China].—Olivia Flores Alvarez, The Houston Press

"A terrific feminist story and a significant document of this incredible human feat."
—Kirkus Reviews

"Unbound is a relentless, gripping story of superhuman endurance, of a refusal to accept defeat...King's book is an exhaustive and excellent study of these women and their hard road to equality and freedom...These women, whose blood and sweat helped build a modern nation, truly walked the walk."—Howard Owen, Fredericksburg.com
or support indie stores by buying on
Copyright © 2020 American Booksellers Association