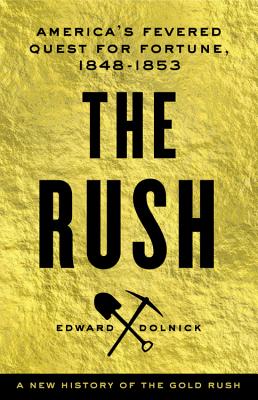 A riveting portrait of the Gold Rush, by the award-winning author of Down the Great Unknown and The Forger's Spell.

In the spring of 1848, rumors began to spread that gold had been discovered in a remote spot in the Sacramento Valley. A year later, newspaper headlines declared "Gold Fever!" as hundreds of thousands of men and women borrowed money, quit their jobs, and allowed themselves- for the first time ever-to imagine a future of ease and splendor. In The Rush, Edward Dolnick brilliantly recounts their treacherous westward journeys by wagon and on foot, and takes us to the frenzied gold fields and the rowdy cities that sprang from nothing to jam-packed chaos. With an enthralling cast of characters and scenes of unimaginable wealth and desperate ruin, The Rush is a fascinating-and rollicking-account of the greatest treasure hunt the world has ever seen.

Edward Dolnick is the author of The Forger's Spell, Down the Great Unknown and the Edgar Award-winning The Rescue Artist. A former chief science writer at the Boston Globe, he has written for The Atlantic Monthly, the New York Times Magazine, and many other publications. There are over 130,000 copies of his books in print. He lives with his wife near Washington, D.C.

PRAISE FOR THE FORGER'S SPELL:
"A gripping historical narrative...Dolnick, a veteran science writer, knows his way around a canvas...The Forger's Spell has raised provocative questions about the nature of art and the psychology of deception."—Washington Post Book World

"Dolnick brilliantly re-creates the circumstances that made possible one of the most audacious frauds of the 20th century. And in doing so Dolnick plumbs the nature of fraud itself...an incomparable page turner."
—Boston Globe

"[Dolnick] tells his story engagingly and with a light touch. He has a novelist's talent for characterization, and he raises fascinating questions."
—New York Times Book Review

"The Forger's Spell is an excellent read, a swift and astute narrative written from many complex perspectives to great effect."—Chicago Sun-Times

"Pacing and prose as gripping as those of the best mystery novelist...The Forger's Spell is simply spellbinding."—Philadelphia Inquirer

"An engaging and highly amusing account of a clever craftsman. . . . On all those levels this is a delightful foray into art history and psychology"
—St. Louis Post-Dispatch
or
Not Currently Available for Direct Purchase
Copyright © 2020 American Booksellers Association