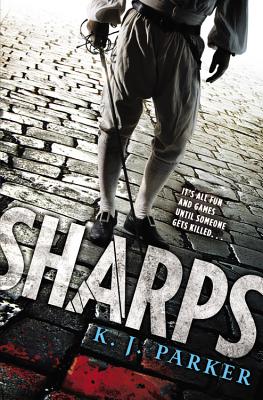 For the first time in nearly forty years, an uneasy truce has been called between two neighbouring kingdoms. The war has been long and brutal, fought over the usual things: resources, land, money. . .

Now, there is a chance for peace. Diplomatic talks have begun and with them, the games. Two teams of fencers represent their nations at this pivotal moment.

When the future of the world lies balanced on the point of a rapier, one misstep could mean ruin for all. Human nature being what it is, does peace really have a chance?

"[Sharps] is a ripping good adventure yarn, laced with frequent barbed witticisms and ace sword fighting... Parker's settings and characterizations never miss a beat, and the intricate political interplay of intrigue is suspenseful almost to the last page."—Publishers Weekly

"This is another splendid offering from K.J. Parker, the (pseudonymous) British fantasist who seems incapable of writing in anything but top form."—Locus