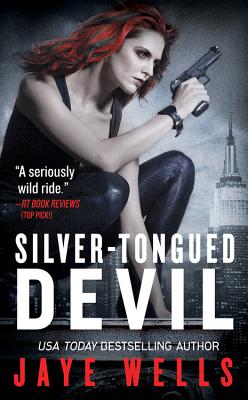 Now that the threat of war has passed, Sabina Kane is ready to focus on the future. Her relationship with Adam Lazarus is getting stronger and she's helping her sister, Maisie, overcome the trauma of her captivity in New Orleans. Even Giguhl is managing to stay out of trouble thanks to the arrival of Pussy Willow and his new roller derby team. But as much as Sabina wants to feel hopeful about the future, part of her doesn't believe that peace is possible.

Her suspicions are confirmed when a string of sadistic murders threatens to stall treaty negotiations between the mages and the vampires. Sabina pitches in to find the killer, but her investigation soon leads her down dark paths that have her questioning everyone she thought she could trust. And the closer she gets to the killer, the more Sabina begins to suspect this is one foe she may not be able to kill.

"When I read Jaye Wells, I see yet another author on the cusp of something great. In my opinion, the potential is there for her to be the next coming of Laurell K. Hamilton and Kim Harrison."—bn.com on The Mage in Black

"Red-Headed Stepchild is action-packed suspense at its best. And urban fantasy doesn't get much better than this. Steeped in mystery, intrigue, and magic, this debut is one of the best I've read in months. Jaye Wells is a promising new talent."—scifichick.com

"Hold on tight -- a gritty new heroine has joined the pantheon of shoot-first, ask-questions-later protagonists."—RT Booklovers on Red-Headed Stepchild

Raised in Texas, USA Today bestselling author Jaye Wells grew up reading everything she could get her hands on. Her penchant for daydreaming was often noted by frustrated teachers. She embarked on a series of random career paths, including stints working for a motivational speaker and at an art museum. Jaye eventually realized that while she loved writing, she found facts boring. So, she left all that behind to indulge her overactive imagination and make stuff up for a living. Besides writing, she enjoys travel, art, history, and researching weird and arcane subjects. She lives in Texas with her saintly husband and devilish son. Find out more about Jaye Wells at www.jayewells.com.
Loading...
or
Not Currently Available for Direct Purchase