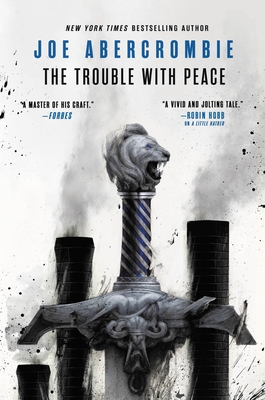 The Trouble with Peace (The Age of Madness #2)

A fragile peace gives way to conspiracy, betrayal, and rebellion in this sequel to the New York Times bestselling A Little Hatred from epic fantasy master Joe Abercrombie.

Peace is just another kind of battlefield . . .

Savine dan Glokta, once Adua's most powerful investor, finds her judgement, fortune and reputation in tatters. But she still has all her ambitions, and no scruple will be permitted to stand in her way.

For heroes like Leo dan Brock and Stour Nightfall, only happy with swords drawn, peace is an ordeal to end as soon as possible. But grievances must be nursed, power seized, and allies gathered first, while Rikke must master the power of the Long Eye . . . before it kills her.

Unrest worms into every layer of society. The Breakers still lurk in the shadows, plotting to free the common man from his shackles, while noblemen bicker for their own advantage. Orso struggles to find a safe path through the maze of knives that is politics, only for his enemies, and his debts, to multiply.

The old ways are swept aside, and the old leaders with them, but those who would seize the reins of power will find no alliance, no friendship, and no peace lasts forever.

The Age of Madness
A Little Hatred
The Trouble With Peace

"A master of his craft." —Forbes


Praise For The Trouble with Peace (The Age of Madness #2)…

"Abercrombie's satisfying plotting and expert subversion of genre expectations are sure to please. Readers will be gripped."—Publishers Weekly

"Abercrombie squeezes your heart till it matches his beat. No one writes with the seismic scope or primal intensity of Joe Abercrombie."—Pierce Brown, #1 New York Times bestselling author, on A Little Hatred

"Abercrombie continues to do what he does best . . . Buckle your seat belts for this one . . . . A vivid and jolting tale."—Robin Hobb, New York Times bestselling author, on A Little Hatred

"Say one thing for Joe Abercrombie, say that he's a master of his craft."—Forbes on A Little Hatred

"A Little Hatred is Abercrombie at his very best: witty, wise, and whip-smart. Masterfully plotted . . . . I had high hopes for this book, and it exceed them all."—Nicholas Eames, author of Kings of the Wyld, on A Little Hatred

"Brutal, unforgiving, and terribly fun. Everything awesome readers have come to expect from Joe Abercrombie."—Brian McClellan, author of Sins of Empire, on A Little Hatred

"With expert craft, Abercrombie lays the groundwork for another thrilling trilogy."—Publishers Weekly (starred review) on A Little Hatred

"Rife with emotion with wit to spare, both honed to an effortlessly fine edge. A Little Hatred is the joy of watching a master of the craft with his tools at their sharpest."—Sam Sykes, author of Seven Blades in Black, on A Little Hatred

"Joe Abercrombie's powerful voice raises the bar in any literary genre. Fantasy fans are beyond fortunate he chose this one."—Myke Cole, author of The Armored Saint, on A Little Hatred

"Abercrombie unerringly juggles a large cast of multifaceted, morally ambiguous characters, each embroiled in their own complicated story."—Booklist (starred review) on A Little Hatred

"A critical, compelling epic fantasy loaded with wonderfully drawn characters, the bloodletting tempered with sharp social commentary and a touch of satire . . . . It doesn't feel like a stretch to say Abercrombie's on his way to writing another masterpiece of epic fantasy."—B&N Sci-Fi & Fantasy Blog on A Little Hatred

"A Little Hatred may be the most accomplished work from a writer who many already consider a master."—SFF World on A Little Hatred

"[Abercrombie] might have his most important series of novels yet."—Locus on A Little Hatred

Joe Abercrombie was born in Lancaster in 1974, spent much of his youth in imaginary worlds, and left school with a good idea of how to make stuff up. After graduating from Manchester University he worked as a TV editor, but he never stopped making stuff up, and his first book, The Blade Itself, was published in 2006. He has since written eight more novels and a collection of stories in his First Law and Shattered Sea series. He lives in Bath with his wife Lou and their three children Grace, Eve and Teddy, and makes stuff up full-time.