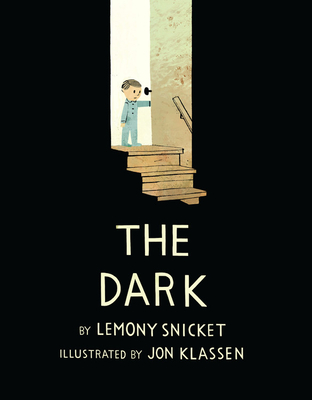 “Young Laszlo is afraid of the dark, but as long as it stays in the basement he can carry on. One night, however, he's forced to face his fear when his beloved nightlight burns out. And, surprisingly, the dark isn't nearly as menacing as he thought. Snicket and Klassen are an author/illustrator pairing made in heaven. Snicket's offbeat and oddly charming tone is complemented perfectly by Klassen's clean, simple representation of light and dark. A quirky and delightful little story to share before bedtime!”
— Megan Graves, Hooray for Books!, Alexandria, VA
View the List

Laszlo is afraid of the dark.

The dark lives in the same house as Laszlo. Mostly, though, the dark stays in the basement and doesn't come into Lazslo's room. But one night, it does.

This is the story of how Laszlo stops being afraid of the dark.


Praise For The Dark…

*"With his command of language, tone, and pacing, Snicket creates the perfect antidote to a universal fear. Klassen's spare gouache and digital illustrations in a quiet black, brown, and white palette (contrasted with Laszlo's light blue footy pajamas and the yellow light bulb) are well suited for a book about the unseen. Using simple black lines and color contrasts to provide atmosphere and depth, Klassen captures the essence of Snicket's story."

*"In its willingness to acknowledge the darkness, and the elegant art of that acknowledgment, The Dark pays profound respect to the immediacy of childhood experiences."—Booklist, starred review

*"While it might not combat fear of the dark, it's an ingenius introduction to horror movie--style catharsis, and a memorable ride on the emotional roller coaster that great storytelling creates."—Publishers Weekly, starred review

*"Snicket and Klassen present a picture book that tackles a basic childhood worry with suspense, a dash of humor, and a satisfying resolution."—School Library Journal, starred review

* "An offbeat -- and spookily atmospheric -- approach to fear of the dark, with a creative story and high-impact artwork...an enjoyable thrill."—The Bulletin, starred review

* "Readers are going to want to read this one over and over."—Library Media Connection, starred review

"Laszlo, though a new creation for this story, somehow seems satisfyingly familiar."—Kirkus Reviews