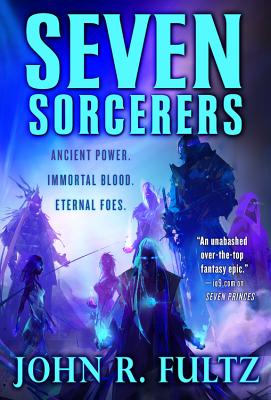 The stunning conclusion to the Books of the Shaper series that began with Seven Princes and Seven Kings...


The Almighty Zyung drives his massive armies across the world to invade the Land of the Five Cities. So begins the final struggle between freedom and tyranny.
The Southern Kings D'zan and Undutu lead a fleet of warships to meet Zyung's aerial armada. Vireon the Slayer and Tyro the Sword King lead Men and Giants to defend the free world. So begins the great slaughter of the age...
lardu the Shaper and Sharadza Vodsdaughter must awaken the Old Breed to face Zyung's legion of sorcerers. So begins a desperate quest beyond the material world into strange realms of magic and mystery.
Yet already it may be too late...

Praise For Seven Sorcerers (Books of the Shaper #3)…

"Book two in Fultz's imaginative visionary tale is the epitome of fantasy. His world building is in a class by itself. His battle scenes explode with inconceivable actions, his imagery and descriptive narrative gives voice and life to his awe-inspiring characters and his heroes and nightmarish creatures give face to his epic tale."—RT Book Reviews Top Pick! (4.5 Stars) on Seven Kings

"What Seven Princes [offers] is breakneck pacing and nonstop insanity..... It's epic with a capital EPIC."—io9.com on Seven Princes

"A stand-out fantasy series from an author with an exceptional talent for characterization and world building."—Library Journal (Starred Review) on Seven Princes
or
Not Currently Available for Direct Purchase
Copyright © 2020 American Booksellers Association