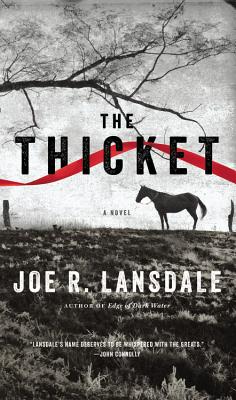 Love and vengeance at the dark dawn of the East Texas oil boom from Joe Lansdale, "a true American original" (Joe Hill, author of Heart-Shaped Box).

Jack Parker thought he'd already seen his fair share of tragedy. His grandmother was killed in a farm accident when he was barely five years old. His parents have just succumbed to the smallpox epidemic sweeping turn-of-the-century East Texas -- orphaning him and his younger sister, Lula.

Then catastrophe strikes on the way to their uncle's farm, when a traveling group of bank-robbing bandits murder Jack's grandfather and kidnap his sister. With no elders left for miles, Jack must grow up fast and enlist a band of heroes the likes of which has never been seen if his sister stands any chance at survival. But the best he can come up with is a charismatic, bounty-hunting dwarf named Shorty, a grave-digging son of an ex-slave named Eustace, and a street-smart woman-for-hire named Jimmie Sue who's come into some very intimate knowledge about the bandits (and a few members of Jack's extended family to boot).

In the throes of being civilized, East Texas is still a wild, feral place. Oil wells spurt liquid money from the ground. But as Jack's about to find out, blood and redemption rule supreme.

In The Thicket, award-winning novelist Joe R. Lansdale lets loose like never before, in a rip-roaring adventure equal parts True Grit and Stand by Me - - the perfect introduction to an acclaimed writer whose work has been called "as funny and frightening as anything that could have been dreamed up by the Brothers Grimm -- or Mark Twain" (New York Times Book Review).

Praise For The Thicket…

" Hellish and hilarious . . . It's classic Lansdale, his own self peppered throughout by much piney backwoods philosophizing on everything from religion to whoring, [with] the author's long-ago trademarked heaping helping of wry, often delightfully vulgar humanism. The Thicket is a keeper and then some." --Austin Chronicle—-

"This latest work reads like a dark version of The Adventures of Tom Sawyer and feels like a Coen brothers movie. It's the perfect mix of light and dark, with plenty of humor mixed in." --Houston Chronicle—-

"Lansdale excels at giving his fans what they want...Many die, but what's really dying here, Lansdale says, is a romanticized way of life." --Dallas Morning News—-

"About a perfect a Western as you'll find . . . Let's say you planned to write a story set in 1916 in Texas. Borrow a little from The Wizard of Oz, a little Mark Twain, and make a nod toward classic western literature. Add humor, some savagery and remove just about everything "PC"-and you might come close to the perfection that is The Thicket. . . . If you're in the mood for something down-and-dirty but oh-so-enjoyable, here's your book." --The Sun News—-

"The Bard of East Texas is back. . . . He has been writing brilliantly about East Texas for three decades, but never has the region appeared stranger or more violent than it does here. . . . Memorable characters, a vivid sense of place, and an impressive body count make The Thicket another Lansdale treasure." --Booklist (starred)—-