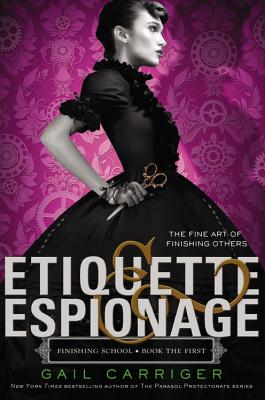 This young adult steampunk series debut set in the same world as the New York Times bestselling Parasol Protectorate is filled with all the saucy adventure and droll humor Gail Carriger's legions of fans have come to adore.

Fourteen-year-old Sophronia is a great trial to her poor mother. Sophronia is more interested in dismantling clocks and climbing trees than proper manners--and the family can only hope that company never sees her atrocious curtsy. Mrs. Temminnick is desperate for her daughter to become a proper lady. So she enrolls Sophronia in Mademoiselle Geraldine's Finishing Academy for Young Ladies of Quality.

But Sophronia soon realizes the school is not quite what her mother might have hoped. At Mademoiselle Geraldine's, young ladies learn to finish...everything. Certainly, they learn the fine arts of dance, dress, and etiquette, but they also learn to deal out death, diversion, and espionage--in the politest possible ways, of course. Sophronia and her friends are in for a rousing first year's education.

* "Carriger deploys laugh-out-loud bon mots on nearly every page...Amid all the fun, the author works in commentary on race and class in a sparkling start to the Finishing School series."
—Publishers Weekly, starred review

* "Carriger's leading lady is a strong, independent role model for female readers... Ladies and gentlemen of propriety are combined with dirigibles, robots, werewolves, and vampires, making this story a steampunkmystery and an adventure mash-up that is sure to intrigue readers..."
—School Library Journal, starred review

"Blending intrigue and elements of the school story, Carriger introduces teen readers to a supernatural-meets-steampunk world full of action and wit."—Horn Book

"If spunky Lady Sybil from Downton Abbey happened onto a steampunk set, she might look a lot like Sophronia Angelina Temminnick."
—ShelfAwareness
or support indie stores by buying on
Copyright © 2020 American Booksellers Association