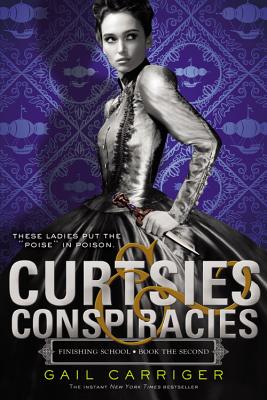 Sophronia's first year at Mademoiselle Geraldine's Finishing Academy for Young Ladies of Quality has certainly been rousing! For one thing, finishing school is training her to be a spy (won't Mumsy be surprised?). Furthermore, Sophronia got mixed up in an intrigue over a stolen device and had a cheese pie thrown at her in a most horrid display of poor manners.
Now, as she sneaks around the dirigible school, eavesdropping on the teachers' quarters and making clandestine climbs to the ship's boiler room, she learns that there may be more to a field trip to London than is apparent at first. A conspiracy is afoot--one with dire implications for both supernaturals and humans. Sophronia must rely on her training to discover who is behind the dangerous plot--and survive the London Season with a full dance card.

In this bestselling sequel to New York Times bestselling Etiquette & Espionage, class is back in session with more petticoats and poison, tea trays and treason. Gail's distinctive voice, signature humor, and lush steampunk setting are sure to be the height of fashion this season.

* "Carriger's second steampunk adventure exceeds the first... the fun, again, is in watching ever-practical Sophronia sneak and scheme her way into sometimes dangerous, sometimes riotously funny, situations.... We repeat: This witty, light-hearted series is not to be missed."
—Booklist (starred review)

* "[A] world of manners, steampunk, and the supernatural. [Carriger] again manages to blend the rules of etiquette with inventions and creatures effortlessly, creating a diverse world of wonder."—VOYA (starred review)

"The language is every bit as delightful as in Sophronia's first adventure... even in this weightier tale."—Kirkus Reviews

"[Carriger] jumps right into the thick of the action, developing a fast-paced plot that is sure to keep readers' attention...this is a must-have purchase."—School Library Journal

"The strength, wit, charisma, and sheer likeability of Sophronia is a refreshing and welcome change from the typical protagonist of today's young adult novels...Teenage girls will laugh, cheer, and empathize as the girls at the academy experience all of the same emotions they do, but in a Victorian steampunk fashion."—Library Media Connection

* "Carriger deploys laugh-out-loud bon mots on nearly every page...Amid all the fun, the author works in commentary on race and class in a sparkling start to the Finishing School series."—Publishers Weekly (starred review)

* "Carriger's leading lady is a strong, independent role model for female readers... Ladies and gentlemen of propriety are combined with dirigibles, robots, werewolves, and vampires, making this story a steampunk mystery and an adventure mash-up that is sure to intrigue readers..." —School Library Journal (starred review)

"If spunky Lady Sybil from Downton Abbey happened onto a steampunk set, she might look a lot like Sophronia Angelina Temminnick."—ShelfAwareness

New York Times bestselling author Gail Carriger writes to cope with being raised in obscurity by an expatriate Brit and an incurable curmudgeon. She escaped small town life and inadvertently acquired several degrees in Higher Learning. Ms. Carriger then traveled the historic cities of Europe, subsisting entirely on biscuits secreted in her handbag. She resides in the Colonies, surrounded by fantastic shoes, where she insists on tea imported from London.
Loading...
or support indie stores by buying on
(This book is on backorder)