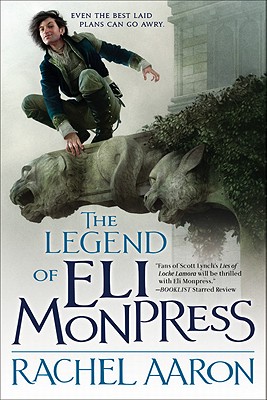 The Legend of Eli Monpress

Eli Monpress is talented, charming, and a thief. And, he's out to make a name for himself in this omnibus edition of Rachel Aaron's "fast, furious, and let's not forget fun" (Tom Holt) fantasy trilogy.

But not just any thief. He's the greatest thief of the age -- and he's also a wizard. And with the help of his partners -- a swordsman with the most powerful magic sword in the world but no magical ability of his own, and a demonseed who can step through shadows and punch through walls -- he's going to put his plan into effect.

The first step is to increase the size of the bounty on his head, so he'll need to steal some big things. But he'll start small for now. He'll just steal something that no one will miss -- at least for a while.

Praise For The Legend of Eli Monpress…

"A romp of a lighthearted fantasy starring an absolutely darling rogue."
—Publishers Weekly

"Witty, smart, snappy, sassy, fast, furious and let's not forget fun... Rachel Aaron isn't so much knocking at the door as kicking it down."—Tom Holt

"The Spirit Thief is a delightfully giddy romp of a novel."—Karen Miller

Rachel also writes fantasy under the name Rachel Aaron. Learn more about her first series, The Legend of Eli Monpress, and read sample chapters for yourself at rachelaaron.net!
Loading...
or
Not Currently Available for Direct Purchase