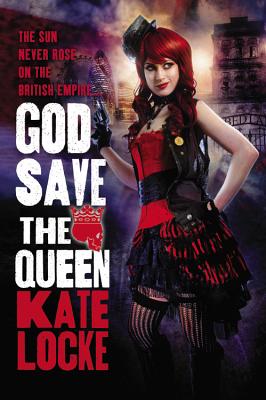 God Save the Queen (The Immortal Empire #1)

The first in an alternate fantasy series where vampires, werewolves, and goblins rule London.
Queen Victoria rules with an immortal fist.

The undead matriarch presides over a Britain where the Aristocracy is made up of werewolves and vampires, where goblins live underground and mothers know better than to let their children out after dark. It's a world where the nobility are infected with the Plague (side-effects include undeath), Hysteria is the popular affliction of the day, and leeches are considered a delicacy. And a world where technology lives side by side with magic. The year is 2012 and Pax Britannia still reigns.

Xandra Vardan is a member of the elite Royal Guard, and it is her duty to protect the Aristocracy. But when her sister goes missing, Xandra will set out on a path that undermines everything she believed in and uncover a conspiracy that threatens to topple the empire. And she is the key -- the prize -- in a very dangerous struggle.

The fantastic start to The Immortal Empire series that continues with the spectacular undead books, The Queen is Dead and Long Live the Queen.

Praise For God Save the Queen (The Immortal Empire #1)…

"A fantastic ride."
—Gail Dayton author of The Compass Rose

"[A] fresh, witty, and darkly beautiful ride... you'll enjoy every minute of adventure and mystery. "—Philippa Ballantine author of Geist

"Delightfully hard-boiled attitude... this is a fun adventure all round."—Locus

"Rapid-paced action and an original interpretation of goblins... add much to differentiate Locke's fantasy from the rest of the pack."—The Library Journal

"Locke has created a truly stunning world ripe with angst, anger and treachery, not to mention filled with complicated characters who are truly unforgettable. Fans of complex and gritty steampunk: Make sure this book and series are on your to-buy list!"—RT Book Reviews (4 1/2 stars) on Long Live the Queen

"Locke's writing is smart and fast-paced, full of sharp dialogue and vivid detail. This stylish, original story is perfectly suited to a wonderfully constructed world."—Publishers Weekly on God Save the Queen

Kate Locke is a shameless anglophile who wrote her first book at age twelve. Fortunately, that book about a British pop band is lost forever. During 'off' hours Kate spends time caressing her collection of Fluevogs, watches BBC America, or plays with makeup. She loves history, the paranormal, horror, and sparkly things.
Loading...
or support indie stores by buying on