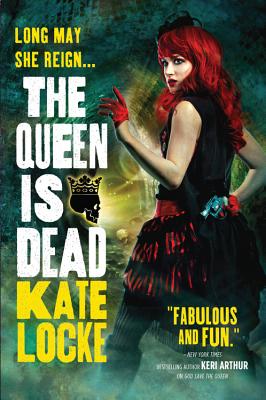 The Queen Is Dead (The Immortal Empire #2) (Hardcover)

The sequel to Kate Locke's spectacular Immortal Empire series that began in God Save the Queen.
Xandra Vardan is the newly crowned Goblin Queen of England. But her complicated life is by no means over.
There are the political factions vying for her favor, and the all-too-close scrutiny of Queen Victoria, who wants her head. Not to mention her werewolf boyfriend has demands of his own, and her mother is hell-bent on destroying the monarchy. Now she's the main suspect in a murder investigation -- and Xandra barely knows which way is up.
What she does know is that nothing lasts forever -- and immortality isn't all its cracked up to be.
The Immortal Empire
God Save the Queen
The Queen is Dead
Long Live the Queen

Kate Locke is a shameless anglophile who wrote her first book at age 12. Fortunately, that book about a British pop band is lost forever. During 'off' hours Kate spends time caressing her collection of Fluevogs, watches BBC America, or plays with makeup. She loves history, the paranormal, horror, and sparkly things.

Praise For The Queen Is Dead (The Immortal Empire #2)…

"[Locke] is as sparkly and tough as her writing; this series is grand fun for urban fantasy fans."
-Library Journal on The Queen is Dead

"God Save the Queen is a fresh, witty, and darkly beautiful ride through a London ruled by a vampire Queen Victoria. Carried along by enchanting Alexandra Vardan you'll enjoy every minute of adventure and mystery. "
-Phillipa Balentine