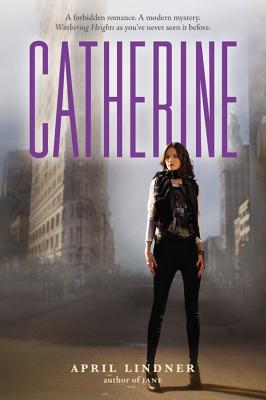 “Following Jane, a new look at the classic Jane Eyre, the second Bront' retelling by Lindner is Catherine, a contemporary version of the masterpiece Wuthering Heights. Lindner reinvents the mystery of the original, and many of its odd, unanswered questions are addressed and overcome. Lindner cuts to the heart of the original story, pulling out the themes and character dynamics that make up the foundation and then expertly twists them. I absolutely loved it!”
— Krys Tourtois, Schuler Books & Music, Lansing, MI
View the List

A forbidden romance. A modern mystery. Wuthering Heights as you've never seen it before.

Catherine is tired of struggling musicians befriending her just so they can get a gig at her Dad's famous Manhattan club, The Underground. Then she meets mysterious Hence, an unbelievably passionate and talented musician on the brink of success. As their relationship grows, both are swept away in a fiery romance. But when their love is tested by a cruel whim of fate, will pride keep them apart?
Chelsea has always believed that her mom died of a sudden illness, until she finds a letter her dad has kept from her for years -- a letter from her mom, Catherine, who didn't die: She disappeared. Driven by unanswered questions, Chelsea sets out to look for her -- starting with the return address on the letter: The Underground.

"Lindner astutely allows her setting to be as important as it is in the original...[The rock club is] seedy, dangerous, and loud, but we don't want to leave."
—The Boston Globe

"Dramatic events touched by love, loss, and longing have all the juicy elements readers will appreciate...[Catherine] captures the agony of love gone wrong."—Booklist

"The strands of mother's and daughter's stories come together during the suspenseful climax...Solid and well-told."
—Kirkus Reviews

"[Lindner] capably streamlines the complex, gothic plot twists of the original as she depicts the passionate but ill-fated love."
—Publishers Weekly

April Lindner is the author of Love, Lucy, Catherine and Jane and a professor of English at Saint Joseph's University in Philadelphia. Her poetry collection, Skin, received the Walt McDonald First-Book Prize in Poetry, and her poems have been featured in many anthologies and textbooks. April lives with her husband and two sons in Pennsylvania.
Loading...
or
Not Currently Available for Direct Purchase