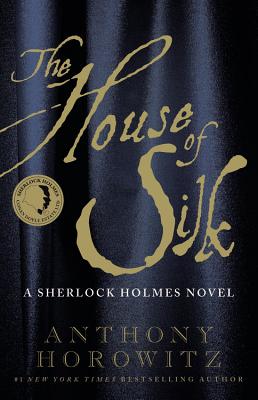 The House of Silk (Hardcover)

For the first time in its one-hundred-and-twenty-five-year history, the Arthur Conan Doyle Estate has authorized a new Sherlock Holmes novel.

Once again, The Game's Afoot...

London, 1890. 221B Baker St. A fine art dealer named Edmund Carstairs visits Sherlock Holmes and Dr John Watson to beg for their help. He is being menaced by a strange man in a flat cap - a wanted criminal who seems to have followed him all the way from America. In the days that follow, his home is robbed, his family is threatened. And then the first murder takes place.

Almost unwillingly, Holmes and Watson find themselves being drawn ever deeper into an international conspiracy connected to the teeming criminal underworld of Boston, the gaslit streets of London, opium dens and much, much more. And as they dig, they begin to hear the whispered phrase-the House of Silk-a mysterious entity that connects the highest levels of government to the deepest depths of criminality. Holmes begins to fear that he has uncovered a conspiracy that threatens to tear apart the very fabric of society.

The Arthur Conan Doyle Estate chose the celebrated, #1 New York Times bestselling author Anthony Horowitz to write The House of Silk because of his proven ability to tell a transfixing story and for his passion for all things Holmes. Destined to become an instant classic, The House of Silk brings Sherlock Holmes back with all the nuance, pacing, and almost superhuman powers of analysis and deduction that made him the world's greatest detective, in a case depicting events too shocking, too monstrous to ever appear in print...until now.

Anthony Horowitz is the #1 New York Times bestselling author of the Alex Rider series and the award-winning writer of PBS's Foyle's War, Collision, and Injustice, as well as many other film and television projects. He lives in London.

Praise For The House of Silk: A Sherlock Holmes Novel…

"Exceptionally entertaining ... one can only applaud Horowitz's skill ... impressive ... an altogether terrific period thriller and one of the best Sherlockian pastiches of our time."
—The Washington Post

"The latest edition to [Sherlock's] distinguished legacy...Admirers of Horowitz's ITV series, Foyle's War, and Sherlockians will delight in equal measure. With consummate grasp, Horowitz unfolds an intricate and rewarding mystery in the finest Victorian tradition...For all its deft and loving fidelity, THE HOUSE OF SILK sees the great detective in grisly and unfamiliar straits."—Vanity Fair

"Cliffhanger plotting... Watson's elegiac voice should silence the objections of even the most persnickety Sherlock scholar."
—NPR

"A book firmly rooted in the style of Doyle, faithful to the character as created and with just enough wiggle room to allow the author to say all the things he's been longing to say about the world of 221B Baker Street...THE HOUSE OF SILK will satisfy."
—The Huffington Post

"Enormously involving and entertaining, and even funny in parts... Classic tales such as the Arthur Conan Doyle stories carry the ideals and anxieties of their age, and of later ones. THE HOUSE OF SILK capably does the same."
—The Philadelphia Inquirer

"The hype surrounding what's being billed as the first pastiche ever officially approved by the Conan Doyle estate is amply justified ... authentic. Horowitz gets everything right-the familiar narrative voice, brilliant deductions, a very active role for Watson, and a perplexing and disturbing series of puzzles to unravel-and the legion of fans of the originals will surely be begging for Horowitz to again dip into Watson's trove of untold tales."
—Publishers Weekly (starred review)

"Nicely captures the storytelling tone of Holmes' inventor in a galloping adventure that boasts enough twists, ominous turns and urgent nocturnal escapades to make modern moviemakers salivate ... Author Horowitz delivers some dramatic tableaux in these pages, including a railway robbery, a prison escape and a horse-drawn carriage chase ... the Holmes we see here is just as cryptic and clever as we've come to expect."
—Kirkus Reviews

"Horowitz truly pulls off the wonderful illusion that Arthur Conan Doyle left us one last tale... Close your eyes and you can smell the shag tobacco of Holmes' church warded pipe as he sorts through the evidence."
—San Diego Union Tribune

"A tone-perfect, action-packed story of corruption, greed and dissolution, all the while capturing the sights, smells and social problems of 1890's London...This reader, albeit no Holmes expert, totally forgot the novel wasn't from Doyle himself."
—The Cleaveland Plain Dealer

"An homage to the Holmes canon; Horowitz does a fine job with the atmospheric setting and tense plotting, and he captures Watson's voice and Holmes' character well. The crimes they uncover will, even in the 21st century, have a shocking ripped-from-the-headlines impact."—St. Petersburg Times

"Can Horowitz astonish us? Can he thrill us? ... Emphatically, yes!"
—The Guardian (UK)

"The author excels at turning his readers into 'Watsons' who are devoted to Holmes and enthusiastically leap into danger just to follow the detective throughout a case...The characterization of Holmes and Watson is true to the original but also offers greater insight into a fascinating friendship...Horowitz even knows how to write a riveting chase scene that, were it filmed for Ritchie's movie franchise, would certainly be an adrenaline-fueled cinematic climax...for its attention to character, quality of plot, and Horowitz's familiarity with the original stories, it scores highly."
—PopMatters.com