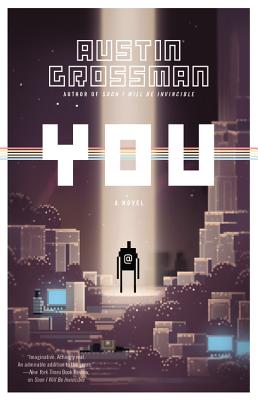 "A razor-sharp comedy ... a smart meditation on the nature of gaming. Grossman, who has designed video games, brings experience but more importantly abundant affection to describing this world--the welcome recognition of the one Dungeon and Dragons enthusiast for another, the surreal happiness that comes from mastery, the semi-ironic clinging to juvenile aesthetics."—Boston Globe

"Some of the most startling, acute writing on video games yet essayed."—Tom Bissell, Harper's

"You confirms Grossman's status as a major talent. Grossman isn't just chronicling the rise and fall of a company, or of a character, or even an industry. Rather, he uses YOU as a tool to prise open the mystical center of what art is, what games are, what fun is, and how they all mix together. A novel that both uplifts and entertains, and reframes the world we live in and the things we do in it. Easily one of the best books I've read this year."—Cory Doctorow, Boing Boing

"A celebration of videogames and their creators."—Booklist, starred review

"YOU is every bit as fun as you hope it's going to be, and also much more. Grossman draws you in with his clever premise, but then as you progress through the levels, you understand the complexity of the world he has built. Full of wit, ingenuity, and nostalgia -- a meditation on what it means to be the hero of the game."—Charles Yu, author of How to Life Safely in a Science Fictional Universe

"A brilliant, incisive, and very funny journey through the adolescence of the computer game industry, delving with wit and charm into the fascinating question of exactly whose story is being told."—Max Barry, author of Jennifer Government and Machine Man

Austin Grossman is a video game design consultant and the author of You and Soon I Will Be Invincible, which was nominated for the Center for Fiction First Novel Prize. His writing has appeared in Granta, the Wall Street Journal, and the New York Times. He lives in Berkeley, California.
Loading...
or
Not Currently Available for Direct Purchase