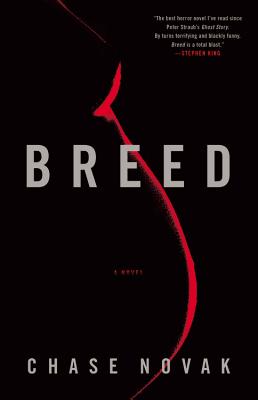 "Forget vampires, zombies and guys clad in hockey masks brandishing oversized machetes. Chase Novak unleashes truly scary literary horror villains in BREED: Mom and Dad. Novak...explores what happens when one's parents aren't quite the protectors they should be in this excellent horror novel. He probes emotionally deep and heartbreaking themes of family and friendship that seem fresh in a book that's a bit like a mad-scientist movie-or Frankenstein if the monster decided he needed some kiddos in his life.... The kids escape their domestic prison, which shifts gears in BREED from a psychological tale to a high-stakes adventure where your fingers can't flip the pages fast enough.... BREED doesn't need love triangles, twist endings or aspects of a gore fest to keep an audience enraptured. Instead, it's the simple conceit-how do you love parents who do more harm than good?-and a moving ending that make Novak's horror novel a thrill to read."
—Brian Truitt, USA Today

"Advanced reproductive technologies prove just a new form of mad science in this timely, engrossing medical thriller.... Novak writes with an energy that propels the reader through the novel's unlikely science and subplots. He also winks enough to suggest that this all could be a black comedy on modern parenting."
—Publishers Weekly

"BREEDis a daring, ultra-modern novel dealing with bleeding edge science and contemporary concerns. It's dark fiction, but not as we know it. An antidote to the anodyne paranormal romances, vampire horrors, and gory splatterfests littering the book charts, this is a truly original work. While transcending the modern, it also deals with universal themes populating literature since we first started telling stories around campfires. Ultimately, this is a novel about the dangers of science-bogus science in particular. It's a story of the Promethean folly of human beings. Written in urgent, vital prose that quickens the blood, it confronts. BREED is an intelligent, dark thriller dense with paranoia, yielding creative anxiety, a genetically modified rollercoaster."—A.J. Kirby, New York Journal of Books

"...A delightfully nauseating read.... Chase Novak has hit upon the perfect blend of terrifying real-life topics.... [and] repurposed his literary flair for observation into grisly narrative schadenfreude.... There is a clever fable about class here, as the Twisdens' tumble down the evolutionary tree mirrors their fall down the economic ladder.... And it's the perfect dark fairy tale for these times, when more than a few readers might secretly find themselves wishing that the world's elites would be brought so low as to start pooping in their own posh living rooms."
—Annalee Newitz, NPR.org

"...A foray into urbane horror, chicly ghoulish, with a malevolent emphasis on family values.... BREEDexploits the contrast between civilized and feral behavior. The grand furnishings of the Twisden homestead wind up clawed, chewed and torn as Alex and Leslie's conditions worsen; the cellar goes all Silence of the Lambs. And in a really fine set piece Mr. Spencer stages a long chase through the Metropolitan Museum of Art, where the relics of primitive times and the veneer of privilege always coexist.... If Mr. Spencer's name were not openly attached to BREED, it would still read like the work of a serious writer with keen antennas for sensory detail.... Above and beyond its fatality count BREED has originality on its side; the ending is a true shocker. The book sets out to convey what it is like to be 'subject to the whip and rattle of unspeakable temptations.' And it does."—Janet Maslin, The New York Times

"A cautionary tale about the perils of fertility treatments turns into a gore fest for the strong of stomach.... There may well be a massive popular readership for this gruesome tale..."
—Kirkus Reviews

"A page-turner, classic yet original, filled with detail both subtle and unforgettable, unnerving in its mad logic and genuinely frightening."
—Richard Price, author of Lush Life and Clockers

"The definition of a literary horror novel."
—Russ Marshalek, Flavorwire

"There are passages during which BREED is really visceral."
—Sam Thielman, Newsday

"For all its Gothic horror pedigree, BREED is ultimately a smart commentary on modern parenting."
—David Abrams for Salon