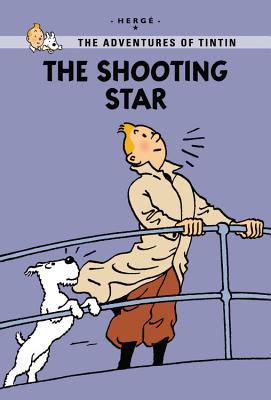 The Shooting Star (The Adventures of Tintin (Paperback)

This new format, crafted specifically for younger readers, features the original Tintin graphic novel plus brand-new content. Go "behind the scenes" with the true story about people, places and antiquities that Hergé drew from, filled with fun facts, lots of pictures, and easy-to-read text! In this adventure: A meteorite collides with Earth! Tintin is part of the expedition to the Arctic Ocean to locate the fallen star. But they aren't the only ones hungry to make the new discovery-someone is trying to sabotage Tintin and his team!

Hergé, one of the most famous Belgians in the world, was a comics writer and artist. The internationally successful The Adventures of Tintin are his most well-known and beloved works. They have been translated into 38 different languages and have inspired such legends as Andy Warhol and Roy Lichtenstein. He wrote and illustrated for The Adventures of Tintin until his death in 1983.
or support indie stores by buying on
(This book is on backorder)
Copyright © 2020 American Booksellers Association