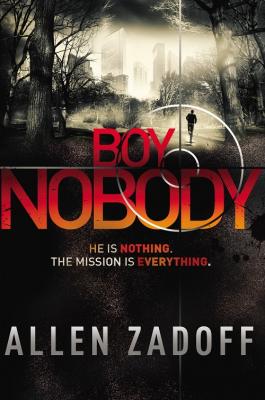 Boy Nobody (The Unknown Assassin #1)

Praise For Boy Nobody (The Unknown Assassin #1)…

Praise for Boy Nobody:
A 2014 Top Ten Quick Pick for Reluctant Young Adult Readers
* "Zadodff shines in this violent, entertaining twist on the teen spy novel. [Boy Nobody is]...a tense and exciting story with a strong cast...blunt and hard edged narration and twists will keep readers riveted."—Publishers Weekly (starred review)

* "[Boy Nobody] is like a darker version of Alex Rider, [and] Thomas in James Dashner's Maze Runner series... Fans of such fast-paced action novels should love this first installment in the Boy Nobody series."—VOYA (starred review)

"Fast, furious, and fun...Plenty of action and drama, and hairpin turns [that] will keep readers guessing; a twist in the end will have them begging for more."—Kirkus Reviews

"A promising start to an exciting new series."—SLJ

"I cannot wait to get this title, first in a new series, into the hands of my male students who are often at a loss for material to read."—Library Media Connection

"When James Bond was a little boy, he wanted to grow up to be half as hard-core as Boy Nobody."—Barry Lyga, New York Times bestselling author of I Hunt Killers

Allen Zadoff is the author of several acclaimed novels, including Food, Girls, and Other Things I Can't Have, winner of the Sid Fleischman Humor Award and a YALSA Popular Paperback for Young Adults. He is a graduate of Cornell University and the Harvard University Institute for Advanced Theater Training. His training as a super spy, however, has yet to be verified.