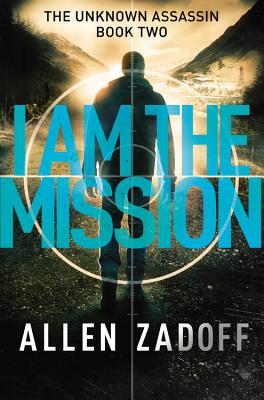 I Am the Mission (The Unknown Assassin #2)

He was the perfect assassin.
Boy Nobody: No name. No past. No remorse. At least until he began to ask questions and challenge his orders -- until he fell in love with his target. Now The Program is worried that its valuable soldier has become a liability.
Boy Nobody, haunted by the outcome of his last assignment, is given a new mission. A test of sorts. A chance to show his loyalty.
His objective: Take out Eugene Moore, the owner of a military training and indoctrination camp for teenagers. One target. Limited time frame. Public place. It sounds simple, but a previous operative couldn't do it. He lost the mission and is presumed dead. Boy Nobody is confident he can finish the job. Quickly.
But when things go awry, Boy Nobody finds himself lost in a mission where nothing is as it seems: not The Program, his allegiances, or the truth.
The riveting second book in The Unknown Assassin series by Allen Zadoff delivers heart-pounding action and thought-provoking characters, as well as a new, exotic setting; a new mission; and new secrets to be revealed.

Praise For I Am the Mission (The Unknown Assassin #2)…

Praise for I Am the Mission:
"Zadoff packs in plenty of tension-filled moments that will leave readers on the edges of their seats...Just when readers think they've made it through one breathless climax, Zadoff adds another twist that tacks on more...Hollywood-esque thrills...A more dangerous Alex Rider for the older set."
—Kirkus Reviews

"In this follow-up to Boy Nobody (2013), Zadoff has crafted another highly suspenseful, compulsively readable futuristic thriller with an agreeably intricate plot and a sympathetic-though often coldblooded-protagonist. Readers will be clamoring for the next volume."—Booklist

"With a high body count, interesting plot twists, technology tie-ins, and nonstop action, this thriller should appeal to teenage boys."—VOYA

Praise for I Am the Weapon, previously titled Boy Nobody:
A 2014 Top Ten Quick Pick for Reluctant Young Adult Readers
* "Zadodff shines in this violent, entertaining twist on the teen spy novel. [Boy Nobody is]...a tense and exciting story with a strong cast...blunt and hard edged narration and twists will keep readers riveted."
—Publishers Weekly (starred review)

* "[Boy Nobody] is like a darker version of Alex Rider, [and] Thomas in James Dashner's Maze Runner series... Fans of such fast-paced action novels should love this first installment in the Boy Nobody series."
—VOYA (starred review)

"Operating in the tradition of both James Bond and of Robert Cormier's I Am the Cheese (1977), Boy Nobody is an auspicious first volume in a promised new series of action-adventure thrillers that will keep readers clamoring for more."—Booklist

"Fast, furious, and fun...Plenty of action and drama, and hairpin turns [that] will keep readers guessing; a twist in the end will have them begging for more."
—Kirkus Reviews

"A promising start to an exciting new series."
—SLJ

"I cannot wait to get this title, first in a new series, into the hands of my male students who are often at a loss for material to read."
—Library Media Connection

"When James Bond was a little boy, he wanted to grow up to be half as hard-core as Boy Nobody."
—Barry Lyga, New York Times bestselling author of I Hunt Killers

Allen Zadoff is the author of several acclaimed novels, including Food, Girls, and Other Things I Can't Have, winner of the Sid Fleischman Humor Award and a YALSA Popular Paperback for Young Adults. He is a graduate of Cornell University and the Harvard University Institute for Advanced Theater Training. His training as a super spy, however, has yet to be verified.
Loading...
or
Not Currently Available for Direct Purchase