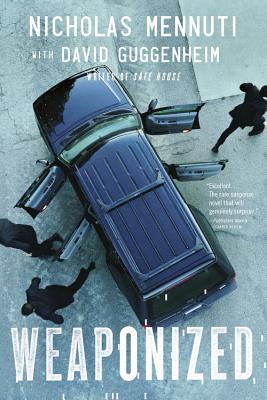 A globe-spanning, wrong man thriller co-written by the screenwriter of the #1 film Safe House.

Kyle West is a wanted man. Having fled the country to escape the false charges filed against himself and his former boss, billionaire government contractor Christopher Chandler, Kyle's hiding in Cambodia, living on borrowed time and finding more and more reasons to be paranoid.

When a mysterious stranger named Julian Robinson walks into Kyle's favorite cafè and offers to swap passports with Kyle, Kyle can't believe his luck. Robinson looks so much like Kyle it's almost unreal, and seems in every way the yin to Kyle's yang: self-assured, charismatic and wealthy beyond measure. Traveling on business, Robinson needs Kyle's passport to get to Africa, where a lucrative deal awaits. Kyle needs Robinson's passport to safely flee Cambodia. The swap seems almost too good to be true.

Unfortunately for Kyle, it is. This one decision plunges Kyle into a Pandora's Box of intrigue that threatens to swallow him whole. Suddenly he finds himself being pursued by Russian oligarchs, Chinese operatives, the CIA, and a beautiful woman trained to kill -- all because Robinson certainly isn't who he seemed. And time is running out for Kyle to discover who he is.

"[An] excellent first novel . . . The authors have their fingers on the
pulse of contemporary life . . . The rare suspense novel that will
genuinely surprise jaded genre readers."

"Applying postmodern polish to the foreign intrigue of Graham Greene and Eric Ambler, WEAPONIZED leaves an imprint with its lively cast of characters, pungent locale and dizzy plotting."
—Kirkus Review

Nicholas Mennuti is a graduate of the Dramatic Writing department at the Tisch School of the Arts at NYU. His short stories have appeared in Agni and Skidrow Penthouse, and are forthcoming in The Ledge and Conjunctions.

David Guggenheim wrote the 2012 Denzel Washington hit Safe House for Universal, and the Nicolas Cage thriller Medallion. He also penned the action film Narco Sub for 20th Century Fox and Uncharted, based on the popular video game, for Sony. Weaponized is his first novel. He lives in New York with his wife and two children.
Loading...
or support indie stores by buying on