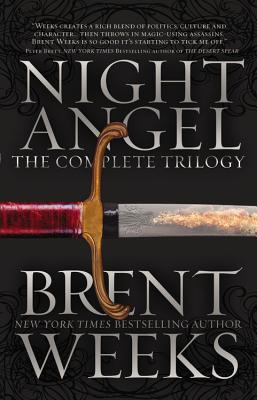 From NYT bestselling author Brent Weeks comes his breakout fantasy trilogy in which a young boy trains under the city's most legendary and feared assassin Durzo Blint.

For Durzo Blint, assassination is an art -- and he is the city's most accomplished artist.

For Azoth, survival is just the beginning. He was raised on the streets and knows an opportunity when he sees one -- even when the risks are as high as working for someone like Durzo Blint.

Azoth must learn to navigate the assassins' world of dangerous politics and strange magics -- and become the perfect killer.

Devour this blockbuster tale of assassination and magic by New York Times bestselling author, Brent Weeks, which has delighted readers all over the world -- with over one million copies in print!

"What a terrific story! I was mesmerized from start to finish. Unforgettable characters, a plot that kept me guessing, non-stop action and the kind of in-depth storytelling that makes me admire a writer's work." --- Terry Brooks

"A compelling epic tale of heroism, vengeance, and magic" --- The Greenman Review

"Best fantasy of the year, possibly the decade." --- BooksMonthly.co.uk

"Weeks creates a rich blend of politics, culture and character in the Night Angel Trilogy... then throws in magic-using assassins. Brent Weeks is so good it's starting to tick me off."—Peter V. Brett, The New York Times Bestselling author of The Desert Spear