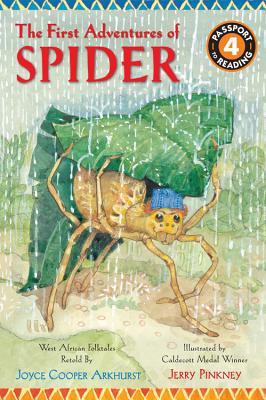 The First Adventures of Spider

In West Africa, children love to listen to stories about Spider. He is a clever and crafty character. He loves to eat and he hates to work, and he plays tricks that get him into trouble. But he tries to be good as much as he can, and he is always lots of fun! Spider stars in three short tales in this collaboration between Joyce Cooper Arkhurst and Caldecott-winning artist Jerry Pinkney, now abridged and redesigned for early readers (Passport to Reading, Level 4). Look for three more tales in The Further Adventures of Spider.

Jerry Pinkney is one of the most heralded children's book illustrators of all time and has illustrated more than 100 books. He has the rare distinction of being the recipient of five Caldecott Honors and the winner of the 2010 Caldecott Medal for The Lion and the Mouse, and has since created several companion books: The Tortoise & the Hare, The Grasshopper & the Ants, The Three Billy Goats Gruff, and The Little Mermaid. He has won the Coretta Scott King Illustrator Award five times and the Coretta Scott King Illustrator Honor four times. Jerry has received several major lifetime achievement awards and was also the first children's book illustrator elected to the American Academy of Arts and Sciences. He lives with his wife, author Gloria Jean Pinkney, in Croton-on-Hudson, New York. The artist invites you to visit his website at jerrypinkneystudio.com.
Loading...
or
Not Currently Available for Direct Purchase