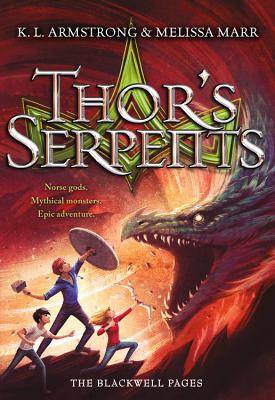 But when they learn that Matt must fight the Midgard Serpent alone and Fen and Laurie are pulled in other directions, the friends realize they can't take every step of this journey together. Matt, Laurie, and Fen will each have to fight their own battles to survive, to be true to themselves, and to one another - with nothing less than the fate of the world hanging in the balance.

Praise for Odin's Ravens:"This sequel stands by itself, as essential details of the first are neatly woven throughout. Intense action, well-crafted scenes and humor-laced dialogue add up to a sure winner...What Riordan has done for Greek and Egyptian mythology, Armstrong and Marr are doing for Norse myths...A Hel of a good read."—Kirkus Reviews

"Loki's Wolves brings Norse mythology to the modern world...The background and explanation of the legends are clear and a natural fit to the story and dialogue, bringing life to lesser-known Norse mythology...Recommended for those who enjoyed Rick Riordan's 'Percy Jackson and the Olympians' series."—School Library Journal

"This smart, fast-paced, action-packed novel...offers readers a solid adventure story that still manages not to skimp on character...An excellent what-to-read-next for Percy Jackson fans, this novel will also please young readers of Marvel's Thor and myth-lovers already familiar with Norse lore..."—Bulletin of the Center for Children's Books

"Loki's Wolves has everything--a fast-paced, exciting plot, endearing and honest characters, Norse mythology with a contemporary twist, and plenty of heart. I can't wait to find out what happens to Matt, Laurie, and Fen!"—Ally Condie, author of the #1 New York Times bestseller Matched

"These authors are no strangers to weaving a compelling tale. Once the story moves past the background, the plot picks up quickly and the adventure doesn't disappoint."—Library Media Connection