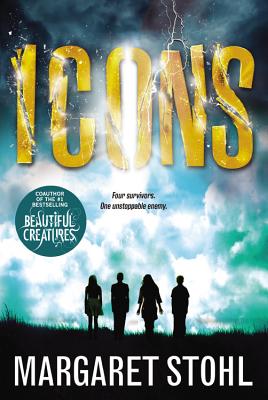 Ro murmurs into my ear. "Don't be afraid, Dol. They're not coming for us." Still, he slips his arm around me and we wait until the sky is clear.

Because he doesn't know. Not really.

Everything changed on The Day. The day the Icon appeared in Los Angeles. The day the power stopped. The day Dol's family dropped dead. The day Earth lost a war it didn't know it was fighting.

Since then, Dol has lived a simple life in the countryside with fellow survivor Ro-safe from the shadow of the Icon and its terrifying power. Hiding from the one truth she can't avoid.

They're different. They survived. Why?

When the government discovers their secret, they are forced to join faint-hearted Tima and charismatic Lucas in captivity. Called the Icon Children, the four are the only humans on Earth immune to the power of the Icons. Torn between brooding Ro and her evolving feelings for Lucas, between a past and a future, Dol's heart has never been more vulnerable. And as tensions escalate, the Icon Children discover that their explosive emotions-which they've always thought to be their greatest weaknesses-may actually be their greatest strengths.

Bestselling author Margaret Stohl delivers a thrilling novel set in a haunting new world where four teens must piece together the mysteries of their pasts-in order to save their future.

Praise for Icons:
"Fans of Stohl's Beautiful Creatures series will find many of the same elements here -- paranormal romance, a fast pace, and intriguing characters -- but within a distinctly science-fiction setting. The strong messages of questioning authority, daring to resist injustice, and loyalty to one's group will resonate with teens who loved The Hunger Games."—Booklist

"Stohl's dystopia is well-written and well-structured. Action balances with character and world development, and interspersed documents reference deeper mysteries, gradually hinting at how the 'icon children' came to be. The multi-layered characters are mostly sympathetic, believably flawed and driven..."—VOYA


"Icons is epic in scale and exquisite in detail-a haunting, futuristic fable of loss and love."—Ally Condie, author of the #1 New York Times bestseller Matched

"I love this book. It's raw and riveting, a scorched-Earth future vision that feels frighteningly real. It's full of passion and deep truths and the kind of power that people only find when they're driven far, far past their limits."—Lev Grossman, New York Times bestselling author ofThe Magicians

"Margaret Stohl is a genius when it comes to characters and their emotions. ICONS had me hooked on the first page, and I can't wait to read the sequel!"
—Richelle Mead, New York Times bestselling author of the Vampire Academy and Bloodlines series

"An action-packed, smart thriller that shows an excitingly different side of Stohl's writing and opens up a fascinating new world."—Holly Black, New York Times bestselling author of the Modern Faerie Tales series

"The ultimate compliment I can give this book: I hate that it was written by someone else. It's just awesome. I hope this one gets made into a movie."—James Dashner, New York Times bestselling author of the Maze Runner trilogy

"Short sentence structure adds to the tension, and the Embassy reports add a level of intrigue. Readers will be waiting for the next book in the series."—Library Media Connection

Margaret Stohl is a lifelong science fiction fan, former video game designer, coauthor of the New York Times bestselling Beautiful Creatures series, and author of Icons. She lives in Los Angeles, California, with her family.
Loading...
or support indie stores by buying on